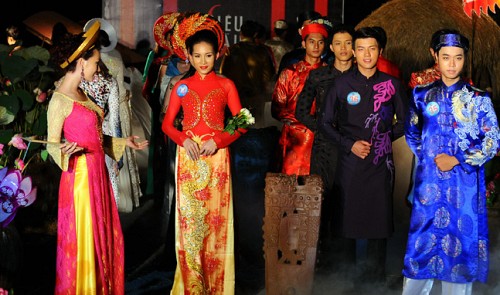 All Vietnamese designers in Vietnam and abroad are welcome to join a ceremonial costume designing competition, which started on Aug 1.

This is an attempt to seek the ceremonial costumes for males and females to be used in national and international activities following three seminars which heard controversial opinions on what the costumes will be like.

Competitors, aged 18 and above, will submit two modern designs of their own and two traditional ones for both males and females, including shoes and headdresses. The deadline is Oct 5.

According to the organizer, the designs must meet certain requirements, including reflecting the cultural identity, being fit for national and international ceremonies and rituals, as well as being convenient and appropriate for the country’s weather and Vietnamese people’s build.

The designers should also blend traditional and modern elements, and are encouraged to use domestically-made and traditional materials.

Vuong Duy Bien, deputy minister of Culture, Sports and Tourism, said that the organizer will have the shortlisted designs donned by average people, not models, to present to the artistic board and the press for opinions.

Bien said if the costumes earn positive feedback, the ministry will submit them to the government to decide whether to use them or not.

In an April meeting, while there was wide consensus that ao dai (traditional long gown) should be the ceremonial costume for women, many doubted it was appropriate for males due to its femininity and inconvenience.