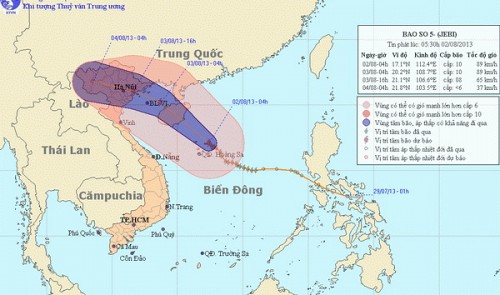 With maximum winds of 102 kph, tropical storm Jebi is moving northwest at 20 kph in the East Sea and will hit Vietnam’s northeastern provinces on Saturday after crossing China’s Hainan Island today, the National Hydro-meteorological Forecasting Center warned. At the meeting of the Central Steering Committee for Flood and Storm Prevention and Control held yesterday evening, Bui Minh Tang, director of the center affirmed that the agency and some other international meteorological organizations have all forecast that the storm will hit northeastern Vietnam. At 4 am on August 2, the storm was centered at 17.1 degrees latitude north, 112.4 degrees longitude east, in a sea area north of Hoang Sa (Paracel) archipelago. In areas near the storm’s eye, the wind force was 75-102 kph with gusts measuring 117-132 kph. Moving at a speed of about 20 kph, the storm will pass through the Chinese island of Hainan on late Friday. At 4 am on Saturday, it may be seen in the Tonkin Gulf, about 230 km east-southeast of the coastal area from Quang Ninh to Nam Dinh province, packing maximum winds of 102 kph.   The storm may then change its direction to move west-northwest, at the same speed, and at 4 pm on August 3, it will get close to the coast of Vietnam’s northeastern provinces, with winds of up to 74 kph and gusts of 102 kph. The storm will later land in the region from Quang Ninh to Thai Binh Province, and possibly including Nam Dinh, according to the center. After its landing, the storm will weaken into a tropical depression and will reach northwestern provinces at 4 am on August 4, with winds of less than 39 kph. The storm is causing rough seas with maximum winds of 102 kph and gusts of up to 132 kph to the sea of Hoang Sa (Paracel) Islands. Starting tonight the Tonkin Gulf will have the same strong winds.  As of Saturday morning, the coastal area of northeastern provinces will have winds of 87 kph and gusts of 117 kph. The southern area of the East Sea, including the sea of Truong Sa (Spratly) Islands, and in the region between Binh Thuan and Ca Mau provinces will have maximum winds of 45 kph and gusts of up to 75 kph. Thunderstorms, possibly together with whirlwinds, will impact these sea areas. The Central Steering Committee for Flood and Storm Prevention and Control has urged northern coastal provinces to consolidate their sea dykes and keep all boats at sea well informed of the storm’s movements so that they can take safety measures in time. Minister of Agriculture and Rural Development Cao Duc Phat, who is the head of the committee, has set up two inspection teams to check preparations by local authorities to cope with the coming storm.

He also suggested that the Foreign Ministry ask China authorities to allow three Vietnamese fishing boats to take shelter from the storm on the Chinese island of Hainan. By yesterday evening, authorities of northern coastal provinces have provided storm-related information to more than 36,600 ships at sea so that they do not enter dangerous areas and can escape the storm.