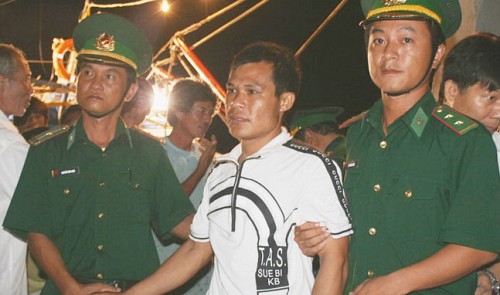 A 30-year-old Chinese man who was found drifting at sea off Vietnam’s central Quang Binh Province in an exhausted condition has been saved by Vietnamese fishermen and procedures to return him to China are underway.  The victim’s name, if pronounced in Vietnamese, is Trinh To Ba. He hails from the Chinese island of Hainan and has recovered after being saved on July 27, said Nguyen Ngoc Hieu, chairman of the Bao Ninh Commune, Dong Hoi District. The provincial border guard force and the local Department of Foreign Affairs are carrying out procedures to repatriate the Chinese man, Hieu said. At 8 am last Saturday, a Vietnamese fishing boat with code number QB 91223TS was fishing in a sea area belonging to Vietnam’s territorial waters when its crew spotted the Chinese man drifting.   The boat sent a lifeboat with some crewmembers to the scene and saved the victim. The man was given first aid and taken ashore later for further care. After his health recovered, the Chinese national said he was among the crewmembers of a fishing boat departing from Hainan. On the night of July 26, when he was walking toward the toilet on the boat while being very sleepy, he fell into the sea. In late 2012, a Vietnamese man in northern Quang Tri Province, Ho Van Lang, saved two Chinese men drifting on a sea area 72 nautical miles southwest of Bach Long Vi Island. The two victims belonged to a Chinese fishing boat. Lang handed over the victims to the provincial border guard force, which took care of them and returned them to China later.