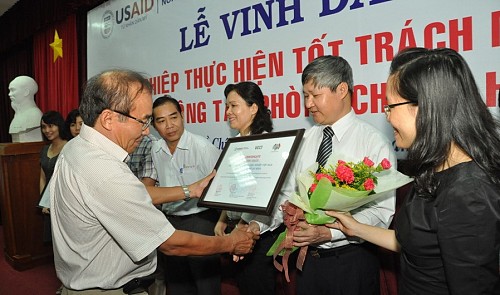 In addition to providing job opportunities for 1,200 people living with or affected by HIV, the five-year HIV Workplace-based project helps prevent new HIV infections among nearly 90,000 employees at 118 enterprises country-wide.

The US$3 million project was launched in 2008 by the United States Agency for International Development (USAID) in cooperation with the President’s Emergency Plan for AIDS Relief (PEPFAR) and the Vietnamese government.

It has been estimated that 80 percent of 206,000 people living with HIV in Vietnam are in working age from 20 to 39 years old so local enterprises find it very necessary to prevent HIV at the workplace.

Many benefits Dai Viet garment company, Transport Co-operative No.9, and the Ho Chi Minh City branch of Vietnam Chamber of Commerce and Industry (VCCI) are among 16 enterprises honored for their significant contributions to HIV prevention.

Nguyen Duc Binh, director of Small Medium Enterprise Promotion Center under VCCI, told Tuoi Tre that the center has organized short HIV prevention training courses for representatives of the targeted enterprises who later shared knowledge they acquired with employees at their companies.

Binh added that VCCI has also trained 60 representatives from the targeted enterprises to be good HIV prevention propagandists.

A more open mind about HIV

Diep Thi Hang Nga, deputy director of Dai Viet Garment Company, told Tuoi Tre that thanks to the HIV workplace-based project, most employees are no longer frightened of post-rehab people, those believed to have high risks of HIV infection.

“Our workers used to be very worried about contact with former drug users recruited by the company so people after finishing drug rehab suffered discriminations at work,” Nga recalled.

Meanwhile, Le Thi Thu Nga, deputy head of Transport Co-operative No.9’s Human Resource Department, said after she disseminated knowledge and information she had acquired from the HIV prevention training courses to her company’s employees, most of them are more open-minded about HIV patients because they clearly know how to limit the risks of HIV infection.

Pham Hoai Giang, director of the HIV Workplace-based project, said that the project has helped change perspectives of the local community and enterprises as well as change the lives of the project’s beneficiaries.

The project is a success

USAID Mission Director Joakim Parker told Tuoi Tre in an email interview that the five-year project was successful because it has helped 1,200 people living with or affected by HIV find their work or run their own business.

* Why did USAID sponsor the HIV Workplace Project in Vietnam?

The USAID HIV Workplace Project followed a previous USAID activity that carried HIV prevention messages to all staff at large companies in Vietnam. It was good to get the messages out, but we knew we could do more to reach people in need. In the USAID HIV Workplace Project, we focused much more reaching individuals in population groups at greatest risk of HIV, including workers in the construction, transportation, mining and entertainment industries. This more targeted approached help us to be more effective in providing economic opportunities and services to improve beneficiaries’ lives. Our activities included job placement, vocational training and small loans to help people living with or affected by HIV start a business and better take care of themselves and their families. The project was valued at $3 million.

* Do you think the fact that more than 1,200 people with HIV/AIDS or affected by the virus have found their jobs or run their own business in five years thanks to the project is a success?

The project succeeded in helping people living with HIV or affected by HIV find work and run their own business. We were pleased to help these realize their potential and move away from self-stigma and economically dependency to enjoying new self-confidence and independence playing a constructive role in Vietnamese society. Many groups have learned from this experience, so we hope larger numbers of Vietnamese will benefit from similar programs in the future.

* Will USAID sponsor further projects to support such people in Vietnam and what would you expect from the Vietnamese government?

The USAID HIV Workplace Project will end by September 30, 2013. Major project activities have been smoothly transferred to its partners. For example, the Vietnam Women Entrepreneur Council will carry out more HIV prevention in the workplace and the USAID Pathways for Participation Project will support additional economic strengthening activities. More importantly, the Government of Vietnam has adopted the project’s microfinance models and is developing a new policy to provide loans to key population groups at highest risk of HIV. This policy development process is being led by the Ministry of Labor, Invalid and Social Affairs (MOLISA) with technical support from the project itself and its partner, USAID Pathways for Participation.