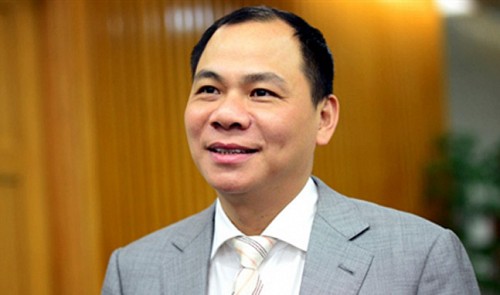 The chairman of Vingroup, one of the country’s largest realty developers, and his wife are collectively holding company shares that are worth an enormous VND21.02 trillion, or roughly US$1 billion, according to a report released Thursday.

As of July 30, Pham Nhat Vuong had 284,622,598 Vingroup shares (VIC), or a 30.64 percent stake, according to a report that summarizes the company’s financial status in the first half of this year by the Ho Chi Minh Stock Exchange (HoSE).

With VIC closing the Wednesday trading session at VND62,000 per share, the total shares of Vuong and his wife were estimated at VND21.02 trillion.

Vuong, who became Vietnam’s first-ever billionaire, according to Forbes' 2013 annual ranking of billionaires released in early June, also holds 121,146,902 shares of the Vietnam Investment Group JSC, where he also owns a 50 percent stake.

In June, Vingroup transferred its entire stake at Tuong Lai Co, the operator of the luxury shopping mall Vincom Center A in downtown Ho Chi Minh City to the Vietnam Infrastructure and Property Development Group.

The deal was worth VND9.82 trillion and Vingroup pocketed a net income of VND4.3 billion.

Not as fortunate as Vuong, Nguyen Quoc Cuong, deputy CEO of Quoc Cuong Gia Lai, another housing developer, saw his share value dipped to only VND3.8 billion, as his stock plunged to VND7,000 per share on Thursday, the HoSE’s report also reveals.

Specifically, as of the end of last month, Cuong only held 537,500 shares of the company, coded QCG, while his wife, famous pop singer Ho Ngoc Ha, and their son owned zero stake, according to the report.

QCG stock was worth VND45,500 per share on the first day it was listed at HoSE, but now slipped to just VND7,000 per share.