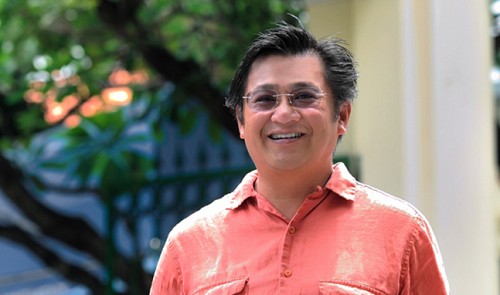 PQ Phan, a famed Vietnamese- American composer of contemporary classical music, has dedicated his lifelong passion to music and has carved out a successful career in composition, particularly in writing his home country’s traditional music pieces to be played on classical musical instruments.

PQ Phan, 51, whose full name is Phan Quang Phuc and has a D.M.A (Doctor of musical arts in composition) from an American university, has spent years composing contemporary classical music by using orchestra instruments to re-create his homeland’s traditional music, including the “cheo”, “tuong”, and “cai luong”.

Phan, who is currently an associate professor of composition at Indiana University’s Jacobs School of Music - one of the US’s leading music institutions - wrote an intriguing concerto titled  “Concerto for percussion and mixed ensemble” during his university years. The piece was inspired by northern Binh Dinh province’s hallmark battle drum rhythm style, in which one artist plays 32 different drums simultaneously.

Phan then assembled 40 various kinds of percussion instruments made of many different materials ranging from wood and metal to leather, and wrote a critically- acclaimed piece for them.

After graduating in 1995, the piece he was most satisfied with at that time was a 22-minute one for a quartet of strings and Vietnamese traditional instruments titled “Nhung hoi uc ve mot linh hon da mat” (Memoirs of a lost soul), which is a musical recollection of his homeland during the war years.

The work has gone on to be strikingly successful, as it has been performed around the globe over 500 times. Phan sometimes receives checks for copyright fees for the piece.

However, his most significant work so far, a 135-minute opera titled “Cau chuyen ba Thi Kinh” (The Tale of Lady Thị Kính), which was adapted from a classic “cheo” (northern traditional music) play, is still in the making. The piece, which is scheduled to hit the stage next spring, will feature an orchestra, a choir and 15 performing roles. It will be the first time that two choruses will be sung in Vietnamese in an opera, though all of the librettos are in English.

The play is set to take place at Indiana University’s 1,460-seat, state-of-the-art opera theater. The university has invested over US$500,000 and many human resources in the play.

In terms of musical notes, Phan invented a new technique in performing Vietnamese traditional tunes in a Western setting by quickly alternating between major and minor three-note intervals.

Phan left Vietnam in 1982 for California when he had almost completed his university course in architecture. One year later, the young man who had taught himself piano in Vietnam was accepted into the University of Southern California’s music faculty.

While up to 70% of the graduates switch to other careers and very few go on to take Master’s and doctoral degrees in music composition, Phan remains steadfast on his chosen road. With many university students able to write only two concertos or one symphony a year to qualify for their bachelor’s degrees, he composed at least 10 pieces, including two symphonies in each of those years.

Phan had composed so many works by the time he graduated that when he sat in an interview for Michigan University’s Master’s program, the interviewer jokingly asked him how many symphonies he had written that morning.

To earn a doctoral degree, apart from compositions and research projects, students had to complete 45 credits. Phan completed double that number, including those on subjects few are interested in.

Phan's music has been performed in countries around the world, including Canada, England and South Korea. His works have been performed by the BBC Scottish Symphony Orchestra, Radio France, the Cincinnati Orchestra, the St. Louis Orchestra - Chamber Group, the Cleveland Chamber Symphony, the Pittsburgh New Music Ensemble, and the Society for New Music, among others.

Phan was also a guest composer at several music festivals, including the Asian Music Week 2000 and the 1999 Asian New Music Festival in Tokyo. He has also pocketed several accolades, including the 1998 Rome Prize, the Rockefeller Foundation Grant, the Residency Award with the American Composers Orchestra, and the ASCAP Standard Awards.