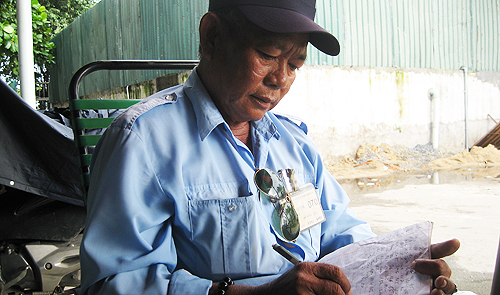 The university entrance exams in July have become a ‘peak time’ of community activities in Ho Chi Minh City and other major cities to offer help to hundreds of thousands of students and their parents from all corners of the nation.

People who live in cities, which are home to most universities and colleges, turn their homes into free lodging during the days when students come to take part in the exam. Some home owners even prepare free meals for the boarders. Others offer free transport around the city.

According to the HCMC Center for Student Support, the city supplied low-price lodging for 360,000 students and free lodging for 51,000 others from 1997-2003. The center director, Quach Hai Dat, said that many families have done the good deed for many consecutive years.

He mentioned a family whose father left a testament asking his sons and daughters to continue giving support to far-from-home students after his death.

Mr. Nguyen Anh An, who turned his newly-bought house on Duong Ba Trac Street in District 8 into a lodging for 30 students during the last entrance exam, said he did it because he can deeply understand the misery of students from the countryside seeking boarding.

“My wife and I decided to help. It costs a lot if a student has to pay for everything in this city for the exam,” An said. “We help them so that we are happy.”

Ms. Nguyen Thi Hue in District 9, who has given free lodging to thousands of students in the last six years, told Tuoi Tre the visitors often return to her house on Bung Ong Thoan Street to inquire about her family and express their gratitude for her previous help.

“I am happy to help them,” said the grey-haired woman pleasantly.

Ahead of an entrance exam, staff of the Student Support Center visit her house to survey the boarding condition before recommending students.

However, she admitted that she doesn’t receive every student who shows up.

“I only help those who are poor and those from farming families,” Ms. Hue said.

She revealed that she selects the right boarders by glancing at their sandals and hands.

“By looking at their outdated sandals I can see more of their situation. I received some students who have only two sets of clothes during their days in this city. A father who accompanied his daughter to the city, which they had never been to before, had only one toothbrush for both of them,” Hue recalled.

“Seeing them, I just want to help them as much as possible.”

Many farming families have to sell off their rice and cattle to afford their children’s pursuit of university education, she added. Many students have had to sleep in parks or bus stations to attend exams here.

“Why can’t this big city of 10 million residents help give them boarding for a few days a year,” Hue asked.

Not only does she offer lodging, Hue prepared food and cooked meals for around 200 boarders during the last exam period.

“I spend 30-40 million dong a year to help students during the exam period,” Hue admitted.

An elderly couple who work as ‘xe ôm,’ or motorbike taxis, at the Mien Dong (Eastern) Bus Station in Binh Thanh District, has been ‘a reliable address’ for far-from-home students coming to HCMC for the entrance exams. They are willing to transport students free of charge during the exam month.

The wife, Vo Thi Nguyet, said, “I drive a motorbike taxi from this station to spots around the city dozens of times a day during exams.” She and her husband refuse to accept money from poor students.

“Once I carried a father and his son to find a shelter during the exam. He paid me 30,000 dong but I refused to take his money. He took his money back, and was so moved he stood still, while tears rolled down his face,” Nguyet recalled. “I am poor but have good health. I didn’t take his money as I still have the chance to give others rides for money.”

Her husband, Do Ngoc Hue, said simply about their charitable job, “I do a good job to sleep well.”

“I get 150,000 dong a day on average, enough for my life. That’s good. I am now healthy and just try to help those unluckier than me,” Hue said.