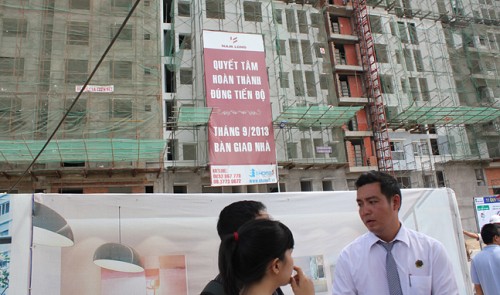 While the investors of some high-end real estate projects are cutting retail prices by almost 40-50 percent, others are planning to get rid of theirs after bleeding money for so long while waiting for the market to recover.

Without any official declaration, like Hoang Hoang Anh Gia Lai Group’s announcement about their temporary withdrawal from the local realty sector, a series of realty businesses have planned to sell their projects.  Many projects have also silently changed hands.

On August 30, Hanoi-based Licogi 16 Corp announced its decision to transfer the Sky Park Garden Project in Hanoi, stating that "the frozen real estate market has restricted the firm from clearing its realty inventories, thus bringing in almost no revenue and profit in the first six months of 2013."

Realty investors in the southern region of the country are also making similar moves.

On August 23, the board of Savimex Joint Stock Co passed a resolution to transfer a condo project in Ho Chi Minh City’s District 7.

One week earlier, the board of the Ba Ria - Vung Tau Construction and Urban Development Joint Stock Co (UDEC) transferred the entire Bau Sen condominium project to other investors.

Within the last month, a series of real estate projects have changed hands.

For example, the Alaska Garden City project, run by the Alaska Real Estate Investment Co, was  transferred to a new owner, FLC, after the latter acquired a 99 percent stake in the former for VND300 billion.

One man’s poison – another man’s meat

An executive at HungThinh Land Co said it has partnered with the investors of two apartment projects in HCMC, a form acquisition in the realty market.

They are under-construction projects, but as the investors cannot afford them anymore, they were forced to sell a portion of the project so that construction can be resumed.

In addition, many projects have fallen into the hands of foreign investors.

Hoang Anh Tuan, general manager of Tac Dat Tac Vang Real Estate Co, said that current difficulties in the real estate market have forced many companies to sell projects, even at a loss, in order to recover their capital.

According to Tuan, when the real estate market was booming [in 2008-2010], many firms outside the industry scrambled to pour capital into the market, even if they didn’t have the resources, experience or personnel to carry out the projects.

The fact is that many apartment projects in HCMC have been delayed, or even stopped, due to lack of capital and poor liquidity.

"If they continue to hold on, investors will certainly face more difficulties due to the pressure of interest rates, so selling at a low price is a feasible solution at the moment,” Tuan said.

However, according to Mr. Tuan, selling a merchantable projects with value of up to a few hundred billion, in the meantime is not easy, except for foreign partners, as most domestic enterprises are facing liquidity problems.

Sharing this point, Luong Tri Thin said the pressure to jump out of the realty sector, especially from state-run firms which were asked by the government to divest from non-core business sectors, is the main reason the number of real estate projects offered for sale has increased recently.

According to Thin, apart from a few local real estate companies, many foreign investors from Japan, Singapore and Malaysia are hunting for appropriate real estate projects for acquisition.

Although the information is not publicly available, many locally named real estate projects have already been sold to foreign investors.

“The difficulty of the project owners is an opportunity for buyers. Investors with ample financial resources currently have many good projects to choose from, and they don’t have to spend too much time on legal procedures, which usually took two to three years in the past, as most projects are merchantable projects," Thin said.

Novaland Co, the investor of the Sunrise City project in District 7, Ho Chi Minh City, has offered phase 3 of its North Towers Apartment project at VND27 million per m2 , down 50 percent compared to the VND50 million per m2 for phase 1, the South City.

In an unusual notification sent to the HCM City Stock Exchange on September 6 , Phat Dat Real Estate Development Recreation Joint Stock Co (PDR) said it would cut prices for 34 land plots in its riverside villas and 41units in the Everich 3 project by 50 percent, to VND40 million per m2 on average.

According to PDR, the implementation of its annual business plan in the current real estate situation remains difficult, so the firm needs to sell to enhance its cash flow to prepare a business plan for the coming year.