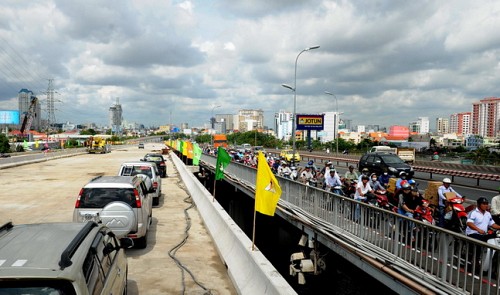 Saigon 2 Bridge to open for traffic in November

After 17 months of construction, the Saigon 2 Bridge that links District 2 and Binh Thanh District in Ho Chi Minh City was completed yesterday. The bridge will be opened for traffic in early November, significantly contributing to easing traffic congestion. The bridge is 987.3 meters long and 23.5 meters wide, with four lanes for cars and two lanes for motorbikes. It runs parallel with the existing Saigon Bridge.  According to its technical design, the bridge has a life expectancy of 100 years and can survive earthquakes of 5.1-5.5 degrees on the Richter scale. The bridge has been built under the BT (Build-Transfer) form with a total cost of nearly VND1.5 trillion (US$70.75 million).

Through the effort of nearly 600 engineers and workers, the construction of the bridge has been completed about five months ahead of schedule. The new bridge is expected to be put into operation on November 2, 2013. One of the city’s key traffic infrastructure projects, the new bridge will relieve overload on the existing Saigon Bridge, help reduce traffic jams, and enhance traffic volume in the city’s northeast entrance area, the city Transport Department said. The department expects to use the new bridge for vehicles traveling from the city’s downtown to Thu Duc District, while using the existing Saigon Bridge for vehicles moving in the opposite direction.