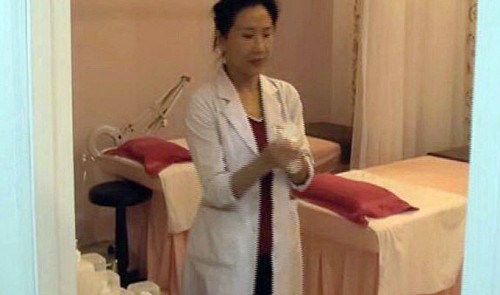 After finding that two clinics which employed foreign doctors were operating without a license, the Ho Chi Minh City Inspectorate has requested that they shut down until they obtain a license, as required by law.

>> Authorities revoke license of clinic with Chinese 'doctors’ The clinics are PNP Gang Nam in Tan Phong Ward, District 7; and Dr Heckmann in Ward 1, Phu Nhuan District. On the morning of September 19, inspectors from the city Health Department checked the Dr Heckmann Clinic and found two patients being treated there. One of the patients was a 59-year-old woman named Xuan, from District 11, who said she was suffering pain in her left knee joint and was treated with an electronic pulse machine. Xuan, who had been to the clinic four times, said Mr. Heckmann gave her an injection in the knee joint each time, at a cost of VND4.5 million (US$212) per injection. For 30 minutes of treatment with the electronic pulse machine, she had to pay VND900,000, Xuan said. The examination fee was VND400,000 and was collected only the first time a patient visited, Xuan said. After receiving injections and fluid transfusions at the clinic, Xuan’s knee was improved, she said, adding that she had paid VND14 million in total to the clinic. According to Tuoi Tre’s own inquiry, the clinic issued a receipt of VND12.9 million on November 20, 2012 to a patient named Le Hong Cuc, a 58-year-old woman from southern An Giang Province. As shown on the receipt, Cuc was treated for osteoporosis, degeneration of both  knee joints, and other related problems.  On December 17, 2012, the clinic also issued Cuc another receipt of VND13.3 million, including the VND10 million cost for two injections. The clinic began to operate without a license in October 2011, a clinic worker named Nguyen Thi Toan said.  At the time of inspection yesterday, Dr Heckmannn was present at the clinic. He has a practitioner’s certificate granted by the Health Ministry.Repeat offender On September 18, city health inspectors inspected another clinic, PNP Gang Nam, in District 7. This clinic had been inspected and suspended, but it was still open and receiving patients. At the time of inspection, Dr Ton That Minh Ky was examining the skin of a patient, while Dr Tran Dang Khoa, who is in charge of medical issues at the clinic, was absent.  At an earlier inspection on August 8, inspectors fined Dr Ky VND 12.5 million for practicing without a practitioner’s certificate. Inspectors also fined three other members of the clinic from VND12.5 million to VND43.5 million for violations of regulations on medical examination and treatment. On August 23, inspectors imposed another fine of VND37.5 million on the PNP Gang Nam General Clinic Co Ltd, whose director is Le Trung Hieu, for different violations. Inspectors also found a South Korean woman, Park Young Mi, working in the clinic’s skincare room. As the woman was wearing a white blouse, inspectors, through an interpreter, asked her to show her practitioner’s certificate, but the interpreter said she was a visitor, not a doctor. When inspectors questioned why she was wearing a doctor’s blouse, the woman took off the blouse and tried to leave. The inspectors stopped her and reported their findings.