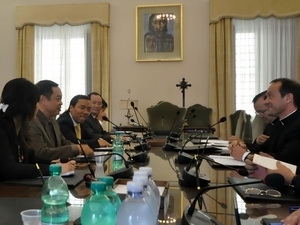 The Vatican has valued progress made in its relations with Vietnam, as well as the Vietnamese Government’s attention and support for activities of the Vietnam Catholic Church. The remarks were made during meetings between Under-Secretary of the Congregation for the Evangelization of Peoples Tadeusz Wojda and Under-Secretary for Relations with States Antoine Camilleri of the Vatican, and a delegation of the Vietnamese Government’s Committee for Religious Affairs. The delegation, headed by Deputy Minister of Home Affairs and Head of the Committee for Religious Affairs Pham Dung, is on a six-day working visit to the Vatican that began September 15. During their meetings, the two sides reviewed the progress in Vietnam-Vatican relations and exchanged views on issues of mutual concern. The Holy See expressed its wish to strengthen relations with Vietnam and called on Vietnamese parishioners to abide by the country’s policies and laws.

The Vietnamese side told the Vatican officials that the Vietnamese Government always supports and creates favorable conditions for religious organizations in the country. The delegation also said that Vietnam has consistently pursued a religious policy that ensures people’s freedom to religions and beliefs, but the country objects to the corrupt use of the issue to cause social instability and harm the common interests of the Catholic community and the nation.

The Vietnamese Government hopes that all Vietnamese parishioners will follow Pope Benedict XVI’s words, which say that a good Catholic is a good citizen, and take specific actions for the sake of both nation and their faith, they added.

For their part, the Vatican side highly appreciated progress made in its relations with Vietnam. They also valued the Vietnamese Government’s support for the activities of the Vietnam Catholic Church in the past.

The Holy See pledged that it will exert every effort to work with the Vietnamese Government to solve existing problems in order to boost their relations. The Vatican officials also said that both sides need to firmly maintain their dialogue via the Vatican’s non-resident special envoy to Vietnam.

During their working visit to the Vatican, the Vietnamese delegation also visited the Vatican Radio and attended a general meeting with Pope Francis.