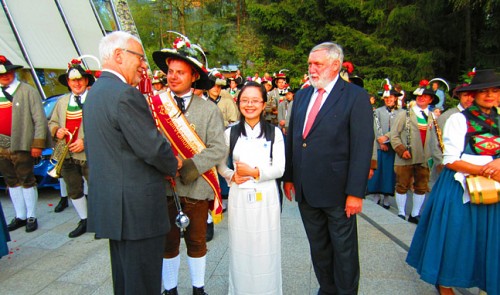 Cao Thi Thanh Huyen’s business project named “Financial products for children” was among the 35 selected ideas, out of 1,100 submitted projects, to take part in the GESS competition in Munich this year.

According to Huyen, Vietnamese children are facing a big problem in managing their personal finance as they are forced to study many subjects such as math and literature while their soft skills are not paid due attention.

On July 23rd, Huyen received the good news that her plan was shortlisted to be among the 35 selected ideas, out of 1,100 submitted projects worldwide. Her project will take part in the Global Entrepreneurship Summer School (GESS) competition held in Munich from September 18th to 26th.

Huyen is the first and only student from Vietnam to participate in the contest this year. She hopes the plan could win a prize so she will have enough money to materialize her project to help Vietnamese children.

The young girl had to overcome lots of difficulties during the three months preparing for the contest. Besides studying and doing the internship, Huyen experienced many sleepless nights in order to finish her project and complete the required procedures.

Huyen’s mother is one of the motivations inspiring her to put most efforts in the project. Even more importantly, Huyen wants to bring Vietnamese image to GESS and prove the business acumen of the Vietnamese. “When I reach the world, ‘nation’ is the biggest motivation which helps me try my best,” Huyen said.

Dr. Howard Williamson, Professor of European Youth Policy at the University of Glamorgan (England), told Tuoi Tre that he personally thinks Huyen should be included in the list of 5% of the most outstanding students.

Howard met the only Vietnamese student who joined the European Alpbach Forum (EAF) in late 2012 and was impressed by Huyen’s presentation and leadership as well as her English speaking skills.

During the conference, she raised tough questions regarding the role of young people in the context of globalization and the challenges they might face. Howard decided to write her a recommendation letter to join GESS as he believed Huyen “would be a great member and have positive contributions to the program”.