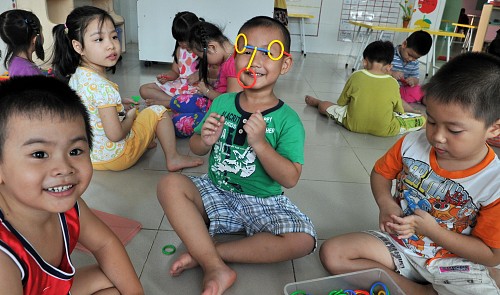 The World Bank will provide US$100 million for a project to promote school readiness among five-year-olds in Vietnam from now until 2017, the international lender said Thursday in a press release.

It will do so via the International Development Association, its concessional lending arm for poor countries, to help carry out the “Vietnam School Readiness Promotion Project” (SRPP) launched the same day in Hanoi.

The project, to be implemented by the Vietnamese Ministry of Education and Training, aims to raise school readiness for five-year-old children, especially those from disadvantaged backgrounds and ethnic minority groups.

About half of Vietnam’s five-year-old children are at risk of lacking at least one area of skills needed to start schooling, according to survey results released at the project launch.

The areas include language and awareness skills, communication and general knowledge, sentiment and level of maturity, social capability, health and physical fitness.

The survey also shows that the percentage of children not ready for school is highest in those of ethnic minority and disadvantaged backgrounds.

SRPP is being introduced to address this problem by raising school readiness for children entering primary education, through supporting selected elements of Vietnam's national program on “Universal Early Childhood Education for Five-Year-Old Children 2010-2015.”