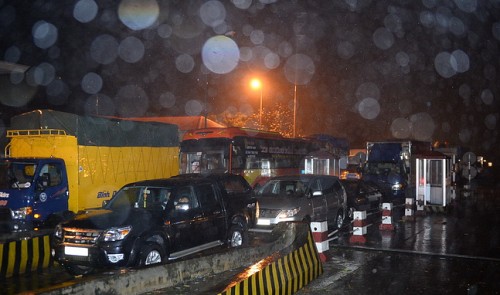 After running along Vietnam’s central region, storm Haiyan slammed the northern Quang Ninh-Hai Phong region, with its center on Quang Ninh, at about 5 am today, packing winds as strong as 88 kph and gusts up to 117 kph, the National Center for Hydro-Meteorological Forecasting (NCHMF) reported.

The storm had forced the evacuation of 500,000 in central provinces.

Soon after the storm's landfall, many streets in the province's Ha Long City have been submerged in 0.5 meter of floodwater due to the rise of the sea level caused by the storm.

At 5:30 am, the antenna tower of the Uong Bi City Broadcasting and Television Station was knocked down by the storm.

In Van Don District, many anchored ships have been slashed by powerful winds and sank.

The storm also slammed the province's Mong Cai town, which borders China, with winds of 62-88 kph.

In Hai Phong City, the storm knocked down many trees, blew off house roofs and caused some other damage, authorities reported.

The entire roof of a large structure in Quang Ninh was blown away by fierce winds (Photo: Tuoi Tre)

Due to the storm, coastal northern provinces had winds of 75-117 kp and some areas such as Bai Chay and islands suffered gusts of up to 149 kph.

After continuing to move mainly in the northern direction at a speed of 15-20 kph, the storm was centered in the southern area of China's southern Guang Xi Province at 11 am today, packing with winds of 62-74 kph and squalls of 75-102 kph.

The storm will continue to move northeast into southern China and weaken into a tropical depression, the NCHMF said.

By yesterday evening, at least 13 people died and 67 others were injured in central and northern provinces  while they were taking measures to cope with the storm, the National Commitee for Search and Rescue reported.

Most of the victims fell from houses and buildings while trying to consolidate them amidst powerful winds.

Of the death toll, four were in Quang Nam, each two in Thua Thien-Hue and Quang Ngai, each one in Ha Tinh and Quang Binh, and the remaining three in other localities.

After the storm left the province and headed for southern China, Quang Ninh authorities reported that four people have gone missing during the storm.

This morning a ship with four people on board sank after being slashed by strong waves. Rescuers could save only one of them. Later one more people went missing when another ship sank in Quang Yen Quay. Efforts to search for the missing people are underway.