The crime scene has also been captured by a journey recorder on a car moving nearby, according to a task force of the HCMC Police Department of Criminal Investigation in Social Order (PC45).

The task force has also handed over Nguyen Manh Huy (20, living in Co Giang Ward, District 1 ) and Ngo Thanh Long (23, living Pham Ngu Lao Ward , District 1 ) for the police agency in District 10 so that they can handle the case.

According to preliminary information, at about 9:17 pm on Tuesday, Huy and Long were on their scooter when discovering a woman standing on the sidewalk of Nguyen Kim Street in District 10 with her handbag.

Long then walked toward the woman, snatched the bag, and got back to the scooter waiting for him to escape.

As trying to flee away from the scene, the vehicle rammed into the rear of another motorbike moving ahead almost immediately after that, causing Long, Huy and the girl riding the motorbike fell down on the road.

They tried to stand up in a hurry, but fell again as the scooter was off balance. As soon as people nearby shout out about the robbery, and many others realized that the two men were the robbers, they round them up.

At that time, a PC45 task force which was on a patrol appeared and immediately seized control of the situation, arresting the two and bringing them to the headquarter of District 10 police agency for detain and investigation.

Through taking testimony, Long confessed had a criminal record for asset robbery.

According to the report from the victim, a 36-year-old woman living in the district, she was carrying two mobile phones and a wallet containing several papers inside when being robbed. 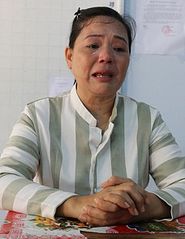 By cheating poor Vietnamese people into transporting ‘clothes’ and ‘sandals’ across borders, the organizers of transnational drug trafficking rings have pushed many into life-long prison sentences