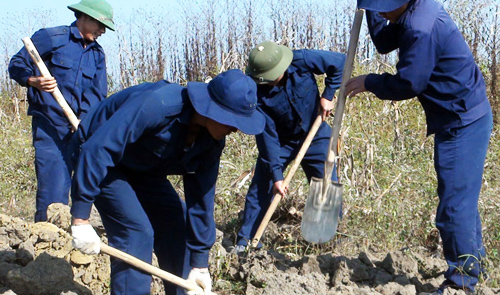 To search and collect the remains of Vietnamese martyrs buried in Laos and Cambodia, the special units of the Vietnam Army had to enter villages and wild forests with bandits, regardless of the risk of exchanging shots with them.

Normally, the units – permanently deployed in those countries – have effective coordination with local authorities and citizens who give them guidance and information on the lost tombs of martyrs.

These martyrs were soldiers who died during the US War before 1975. Although they fell decades ago, their relatives have nurtured desperate hopes of finding their tombs to rebury them in their home towns.

The peak time to search for the lost bodies in Cambodia and Laos is during the dry season from October to April. In the wild forests, a rain may last for days and the searchers aren’t able to see each other only a couple of meters away.

“Even when you are standing on a tomb, you may not recognize it is a tomb because of the thick layer of leaves on the ground,” said a soldier in a searching unit.

Lieutenant colonel Nguyen Van Dau, vice head of a searching unit of Nghe An Province in the central region, said he has 33 staff permanently stationed in Noong Het, Muong Kham, and Phu Cut in Laos for the mission.

Dau said his unit is assigned to find and excavate at least 37 bodies during this dry season.

Their daily job is to contact local authorities and villagers to learn information about the tombs of Vietnamese soldiers. After zoning a site marked by locals, soldiers use trial and error, digging until they find something. Coordinates of the sites are saved in the units’ archives.

“We already searched for and collected the remains of martyrs in these areas. We only came here upon receiving information from locals,” said Dau. “There may be lost tombs. Any information about the tombs of Vietnamese martyrs is respected although we know that the information may be incorrect because of the changes in the landscape over time.”

Looking into immense wild forests at the feet of the mountains, Dau said the soldiers of his unit are expecting to soon have a bone-detecting machine to reduce labor.

“If we can’t find a tomb after receiving information, we can’t rest or have peace of mind. Our obsession continues until we find the martyrs,” Dau said about the psychological troubles of his teammates.

Lieutenant colonel Hoang Ngoc Lan, head of other searching units in Pha Xay, Lac Khoi, and Noong Pet, said the areas he must search include the villages of bandits who were initially of the opposition party in Laos and later hid themselves in forests.

The remains of a martyr in a forest of Na Village in Laos (Photo: Tuoi Tre)

Lan added that his searches are based on four factors: maps of previous military units; information from veterans of Vietnam and Laos; information from locals, including bandits; and the burial method of the Vietnam Army during the war. A deceased soldier was wrapped in canvas and hammocks and his identity was written on a piece of paper and encased in a glass bottle.

Lan revealed that he even sent his staff to visit bandit villages, help them with their crops, and drink with them to get information on local tombs. Some bandits helped the Vietnamese soldiers because of their personal relations, but others rejected them and even threatened to kill them.

In 2001, a group of bandits shot the head of Na Xu May Village and his wife dead for helping Vietnamese soldiers find the bodies of fallen soldiers. In 2012, bandits killed 14 locals in Pha Xay District for the same reason.

Late last month, bandits announced they would kill any Vietnamese soldiers searching for bodies along the highway from Phonsavan to Loong Cheng. In a recent campaign against bandits, the Laotian army killed two, injured two, and arrested five others. Toong Cu Tu is one of the leaders of the bandit villages. Foreign sponsers have supplied him with weaponry and money.

Vietnamese soldiers approached Toong Cu Tu by helping him build houses and farm, and were given the sites of 17 tombs of Vietnamese martyrs in Nam Pich village, said lieutenant colonel Lan.

Earlier this month, Vietnam’s search teams in Laos finished their last trip of this year. “We were lucky to find 10 martyrs during this trip,” Lan said.