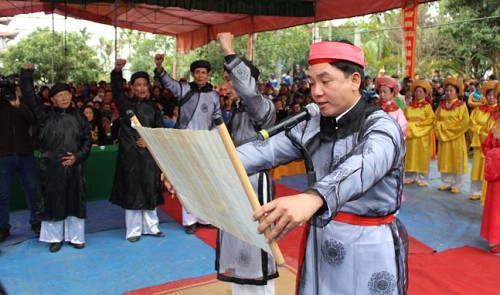 Let him who takes bribes be struck dead

Unlike most other traditional fests where visitors flock to pray for good luck and wealth, the “Minh The” fest, held at the national cultural relic Hoa Lieu temple in Kien Thuy district, drew several hundred locals and visitors, who only came to witness the oath taken.

Head of the Hoa Lieu village drew a circle on the ground, into which the oath takers who are officials and village elders would step, before he read out the proclamation that whoever takes bribes, misappropriates public assets or abuses power will be struck dead by deities.

The oath takers raised their fist to indicate their resolution in abiding by the oath. The ritual ended with officials and visitors drinking from cups of traditional wine which was diluted with a sacrificed chicken’s blood.

According to Pham Dang Khoa, 80, one of the village’s elders, the 500-year-old fest is one of the province’s time-honored and unique ones.

He added that according to historical archives, in 1561, Vu Thi Ngoc Toan, the Mac dynasty’s empress dowager, raised funds and land from court officials and locals to build a pagoda in the area.

After the pagoda was built, a large plot of land wasn’t used and became a communal asset. The officials then took an oath not to misappropriate the plot.

Since then, on the 14th of the first lunar month every year, officials took the oath in front of locals. The Nguyen dynasty (1802-1945), the country’s last one, later bestowed a coveted title on the village for holding the fest.

After 1954, the “Minh The” gradually faded and disappeared altogether.

Concerned that their offspring won’t be able to witness, take and abide by the honesty oath, in 2000, Khoa and several other village elders began their quest to revive the fest.

He raised some VND100 million (US$4,717) from locals to renovate the Hoa Lieu temple. He and the others also translated the proclamation from “Han” language (ancient Chinese script) to modern Vietnamese, and reproduced all the age-old rites recorded in historical archives.

By 2003, with consent from the district People’s Committee, the “Minh The” fest officially made its comeback.

“In the old time, depraved or abusive officials didn’t dare to step into the oath circle. In today’s society, the oath is still of life-and-death significance, as those who fail to comply with the oath will find it hard to live in harmony with residents,” Khoa stressed.

“Though the fest is confined to the village, its ideology and impact have gone far beyond. Though I didn’t step into the oath ring this time, I’ll keep reminding myself to stay steadfast to the sacred vow,” said Do Xuan Trinh, deputy chair of the district People’s Committee.