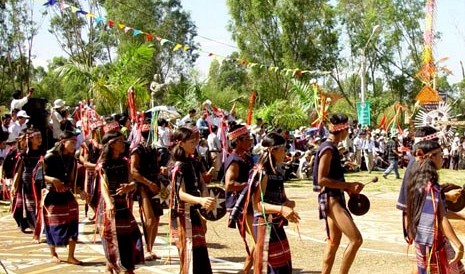 ‘Ning nong,’ a time of celebration in Central Highlands

“Ning nong” season, when ethnic minority groups in Vietnam’s Central Highlands take a break from fieldwork to celebrate a new crop, holds great appeal to both locals and tourists.

In the ethnic Xe Dang group’s dialect, “Ning nong” season is the interval between a finished crop and a new one, a month with no fieldwork dedicated to rest and rejuvenation.

The word also means “endless,” suggesting that the fun will never cease.

Previously, during the “Ning nong” season, which falls on the third lunar month, ethnic people would return to the forests, where their ancestors were believed to dwell.

They would rest and hold a host of festivities and merrymaking activities. Wearing only a “kho” (loincloth), the people would roam the forests and hunt and scavenge food just as their ancestors did in primeval times.

According to researchers, this celebration is indicative of the ethnic people’s awareness of and respect for the universe, as they live in harmony in the triangle of humans, forests, and deities.

The traditional “Ning nong” has faded, alive only in the memories of the elders. The modern day “Ning nong” is mainly just a month for rest and festivities.

Each ethnic group now has their own way to celebrate the month. They celebrate the new “rong” house (house on stilts for communal activities) and bumper crops, and make “can” (traditional wine), papooses (baskets that women carry on their backs), and musical instruments.

Even during the Gia Rai people’s “pothi,” in which they bid their last farewell to their deceased loved ones, they do not hesitate to sing in an attempt to attract mates, in the belief that life and birth always go hand in hand with death.

Another highlight of the “Ning nong” is the “xoang” dance, which gathers many locals and tourists around flickering fires, dancing merrily to the beats of a gong.