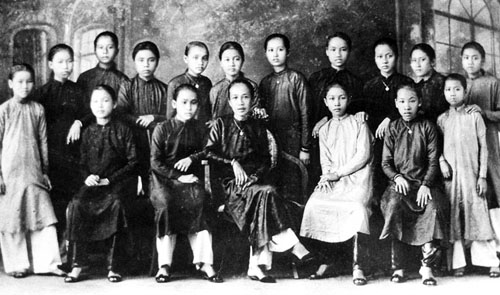 Under the disguise of performing ‘Đờn ca tài tử’, a traditional musical art of southern Vietnam, members of the all-female band ‘Đồng Nữ Ban’ (All Female Band) provided support for the Vietnamese revolutionary movement against French colonialism in the early 20th century.

The band was founded by Ms. Tran Ngoc Dien, the aunt of famed Vietnamese musicologist Tran Van Khe, in 1927, and was broken up two years later after the French colonialists detained and tortured some of the band’s members.

The group was actually led by the Vietnam Revolutionary Youth League, the forerunner of the Vietnam Communist Party.

Professor Tran Van Khe recalled the debut of the band was a big surprise because all of its members were female.

The main target of the band was to excite a sense of patriotism among locals.

After deducting expenses, all of the profits earned by the band were contributed to a revolutionary fund.

Dien was skillful at playing the four-chord lute and the 16-chord zither, Khe said. Sadly, she had a child who died at three months and her husband passed away soon after that.

She left for Saigon and was recruited to teach household arts in a famed school, now known as Nguyen Thi Minh Khai School.

At the school in 1926, she led students in a revolutionary movement to fight against the French colonialists and was later fired for doing so.

Returning to her hometown in My Tho, located in the Mekong Delta, she socialized with revolutionary leaders and was assigned to set up the band in 1927.

Besides performing on stage, members of the band followed a disciplined schedule of academic learning, training in kungfu, and performing.

According to the memoirs of band member Ms. Tran Thi Oi, which are currently kept at a museum in the Mekong Delta province of Tien Giang, the band performed its first play 'Giọt lệ chung tình' (Faithful Tears) in the province’s Vinh Kim Commune in the middle of 1928 and earned a total of 270 piasters – a very large sum for the time.

Oi’s memoirs recount the experience of performing a man’s role as a woman. Admiring the male characters skillfully performed by the women, many audience members stole to the stage’s back door after the show to see if the actors were really women.

Although the colonial authorities asked the band to sing La Marseillaise—the national anthem of France—to close a show, the band refused and instead sang ‘Long Hổ Hội’, a Vietnamese folk song.

The Nam Tu theater in My Tho (Photo: Tuoi Tre)

The band’s second show was held in My Tho, now the provincial capital of Tien Giang, and the colonial authorities sent gangsters to block the road, disturb performances, and steal money from the band. However, the show took place and earned a record 300 piasters.

The third show was organized at the Nam Tu Theater in My Tho, where naked gangsters blocked the way to the theater. They also threw stones at the theater and stole money from ticket sales. However, the show was still performed.

In 1929, the band was disbanded after two members, Hoe and Luu, were detained for ‘their involvement in politics and exciting people to disturb security’.

In dealing with the situation, the Vietnam Revolutionary Youth League had to pause the operation of the band and send the band members to different localities, fearing more arrests.

The band never convened again, and Ms. Dien returned to her hometown in Vinh Kim to help raise Tran Van Khe and Tran Van Trach, who became famous stars throughout Vietnam and the world. Ms. Dien died in 1944.