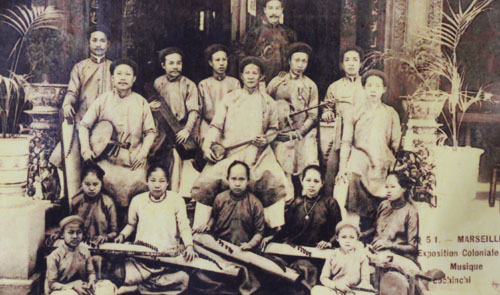 Over 100 years ago, ‘Đờn ca tài tử’, the unique traditional musical art of southern Vietnam, was first performed in France by a troupe from My Tho. Last month, the art was recognized by UNESCO as an Intangible Cultural Heritage of Humanity.

A 1906 tour of Marseille of a ‘Đờn ca tài tử’ troupe from My Tho helped reshape the art of performance in Vietnam and created a new art form called ‘cải lương’, a type of ‘Đờn ca tài tử’ with acting.

It can be said that ‘Đờn ca tài tử’ is the father of ‘cải lương’, confirmed Ph.D. Tran Van Khe, a Vietnamese musicologist, academic, writer, teacher, and performer of traditional music.

A ‘turning point’ in Marseille

In the early 1900s, the ‘Đờn ca tài tử’ musical group directed by Tu Trieu from My Tho – now the provincial capital of Tien Giang Province in the Mekong Delta – was well known across southern Vietnam.

The band performed every night at the theater owned by Mr. Nam Tu which drew members of elite society. The group was noticed by French officials working in Vietnam, who invited the band to tour their native country.

In 1906 the band performed many shows at the Marseille fair held from April 15 to November 11 in France.

At that time in Vietnam, band members did not sit on a stage, but instead sat behind a background. In France, they were solemnly introduced and sat on a large stage to perform.

After their tour of Marseilles, the Vietnamese musicians became used to this western practice and began to present themselves on stage so the audience could not only listen to them, but watch them perform. My Tho was the first locality to present artists in this fashion.

Thus, the French tour was instrumental in changing the performance style of all Vietnamese bands.

Another man, Tong Huu Dinh from the delta’s Vinh Long Province, helped lay the foundation for ‘cải lương’ when he asked singers to not only sing but also act onstage as characters.

The first play ever performed is a disputed issue. Some argue that it was ‘Kim Vân Kiều’ while others believe it was ‘Lục Vân Tiên’. Both plays were composed by Truong Duy Toan.

Nam Tu operated the theater and organized the recording of famous ‘cải lương’ performances onto records, which were sold to fans across the nation.

The firm in charge of these recordings was Pathe Phono. Then, discs had a low recording capacity and so, each ‘cải lương’ play was recorded on six to 12 discs.

However, recordings were halted in 1928 after Nam Tu became bankrupt.

On February 11, the Vietnamese Ministry of Culture, Sports and Tourism and the Ho Chi Minh City People’s Committee hosted a ceremony to receive the certificate in recognition of ‘Đờn ca tài tử’ as an “Intangible Cultural Heritage of Humanity” from UNESCO at the Reunification Palace. UNESCO’s recognition of ‘Đờn ca tài tử’ reflects the appreciation and respect of the international community for the unique Vietnamese art form, said Prime Minister Nguyen Tan Dung at the ceremony. The acknowledgement not only brings pride to Vietnamese people but also contributes to the preservation of the cultural treasures of the world. The accolade represents the vitality of Vietnamese traditional culture during its process of integration into the world’s culture, the premier added.