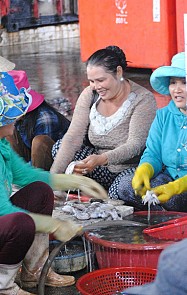 The woman who found wealth in the sea

A woman in the central province of Quang Ngai has gone from rags to riches thanks to her successful squid business.

Le Thi Mai of Duc Pho District has broad shoulders, a loud voice, and the weather-beaten face typical of locals in coastal areas.

She has grown from a mere salt peddler to a VND billionaire and director of a company producing dried squid.

Thirty years ago, Pho Thanh commune, where Mai grew up, was known for its vast salt fields.

Like most local women, Mai traveled far and wide on foot to sell heavy loads of salt which she carried on a rattan pole.

“It was a really tough time. Back then, 10 loads of salt wasn’t equal to one load of rice. But we still had to do it, as it was our sole means of living,” she recalled.

Her husband, a fisherman, could not earn much either. Despite their hard work, their family remained extremely poor.

At 25, Mai gave birth to her second child. She would carry her older 2-year-old child at one end of the pole and salt on the other, and travel several kilometers a day to sell the salt.

While peddling salt, she learned that those selling dried squids made good profits.

Pregnant with her third child, she then traveled some kilometers to neighboring Binh Dinh Province to get the supplies of dried squids and peddle them along highways and on trains while taking her eldest child along.

“Selling squids earned me more than selling salt, but I had to travel long distances to get the dried squid. I then realized that buying fresh squid and drying and packing them myself could make me greater profits and save me from traveling long distances,” Mai added.

Mai started turning her enterprising thoughts into reality. She began from scratch, drying the squid herself on the sand and packing them.

Her business gradually grew and she accumulated some capital. She hired some 10 local women, and now employs 200 workers.

She purchased her current 1,300 square meter factory from a Korean company after one year of negotiation.

“I don’t really care about being a director; I registered my business to turn it into a company because my partners wanted me to. I’m just happy that I can work together with other local women and provide jobs for them,” Mai shared modestly.

Because of her past, Mai deeply sympathizes with poor people and is willing to give loans to her workers and squid suppliers.

She also employs physically challenged and elderly people, paying them a stable monthly income of VND4.5 million ($219), quite a large sum for locals.

“Mai is a great sister who gets along exceptionally well with her workers. During the 20 years I’ve been working here, I’ve never seen her shouting at or being bossy towards her staff. She also helps with our work during busy times,” said Nguyen Thi Lan, who has been with Mai’s company since its infancy.

“Mai has really come a long way. Not only has she earned a lot of money for herself and her family, she has provided stable jobs for many locals and is active in charitable activities. Her efforts are really phenomenal,” remarked Nguyen Ky, head of the Pho Thanh commune’s People’s Committee.