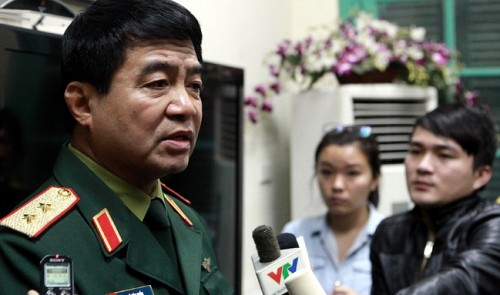 Vietnam officially stopped searching for the plane on Saturday and on the same day notified other countries to withdraw their search and rescue forces from its waters, said Lieutenant General Vo Van Tuan, Deputy Chief of General Staff of the Vietnam People's Army, at a press conference in Hanoi.

The country launched a search operation immediately after being informed of the disappearance of the plane carrying 239 people en route from Kuala Lumpur to Beijing on March 8.

But Vietnam ceased the operation on March 15, following a statement by Malaysian Prime Minister Najib Razak a day earlier that Malaysia called off its rescue and search mission in the East Vietnam Sea.

Malaysian rescuers are now focusing their search on two large geographical corridors: a northern arc stretching from the border of Kazakhstan and Turkmenistan to northern Thailand, and a southern corridor stretching from Indonesia to the southern Indian Ocean.

Some of the Vietnamese ships were assigned to oversee the withdrawal of the foreign forces joining the large-scale search effort in Vietnam's waters, Tuan said.

On Monday, three Chinese marine surveillance and naval ships remained in Vietnamese waters. But these vessels eventually left following notifications from the Vietnamese side.

“There are no foreign ships searching for the missing jetliner in Vietnamese waters at the moment,” Tuan asserted.

Before ending its jet hunt, Vietnam deployed 11 aircraft that conducted a total of 55 flights and ten ships for a search operation that scoured an area of up to 196,000 square meters in its waters.

MH370 was initially reported to go missing about 275km off Vietnam’s Tho Chu Island, which is 157km away from Ca Mau, the country’s southernmost province.

In a separate development, the Pentagon announced on Monday that its guided missile destroyer USS Kidd will be withdrawn from the international search for flight MH370, saying the search area is now so extensive that it is more efficient to look for the jet using surveillance aircraft, according to AFP.

Twenty-six countries have been involved in the massive international search for the missing plane, now in its second week, Malaysian officials announced.

Every tattoo is a story, and this one might leave you in tears