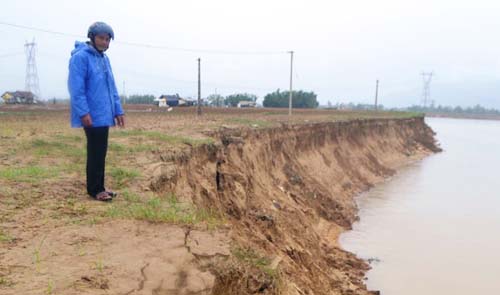 After exhausting the water flow of many rivers and badly affecting the lives of local people by building hydropower plants, authorities in Vietnam have recently pledged to prioritize water for people over the plants.

The promise was given last week by the Ministry of Natural Resources and Environment during a meeting in the central city of Da Nang to tackle water shortages in rivers in the central region during the dry season.

In the past years, people in such central provinces and cities as Da Nang, Quang Nam, Quang Ngai, Kon Tum, Gia Lai, and Dak Lak have suffered from a long-lasting lack of water for daily life and farming as a result of the accumulation of water in reservoirs to produce electricity at local hydropower plants.

Other consequences following the ‘man-made’ water shortfall include an unexpected change in the river flow, the movement of riverbeds, soil erosion along river banks, and bad damage to the environment.

Not only confronting water shortages in the dry season, local residents in the flood-prone central region often experience ‘double flooding’ during the rainy season when tons of water bodies are discharged from hydropower plant reservoirs.

On April 10, Nguyen Thai Lai, a deputy environment minister, told central region authorities at the meeting that the preparation of a draft regulation on the accumulation and discharge of water from reservoirs has been completed and the operators of hydropower plants would have to follow it strictly once the document is ratified.

Three major reservoirs A Vuong, Dak Mi 4, and Song Tranh 2 in Quang Nam play a decisive role in the circulation and distribution of water to the Vu Gia River that flows through many localities which contribute a big volume of agricultural produce to the central region.

The regulation will prioritize the provision of water to downstream rivers for farming over the accumulation of the natural resource in reservoirs for generating power, Lai added.

The official confirmed at the meeting that his ministry will try its best to minimize harmful effects on residents in the central part, where many hydropower plants are placed.

Given a large number of such plants there, experts have warned residential areas in Kon Tum’s provincial capital Kon Tum City and other districts would have to deal with the scarcity of water for their daily activities and cultivation on account of the exhaustion of the local Dak Bla River.

In addition, a 20km section of the Srepok River will likely be dried up thanks to the upper Kon Tum plant. That would in turn lead to the ‘death’ of the national park Yok Don in the area.

Accompanying consequences would be the ‘deaths’ of such streams as Wer, Ea Tul, Ea Mot, Ea Ndraik, Dak Hua, Jeng Lanh, as well as the iconic seven-stage waterfall Pongour, which is a tourism hotspot in the Central Highlands.

Dr. Bao Huy from Tay Nguyen University, situated in Dak Lak, said the ‘deaths’ of these streams and rivers would also negatively change the flora and fauna in the area.

A fight for water

Hoang Van Bay, head of the Department of Water Management under the environment ministry, said at the same meeting that the parameters in the draft regulation were written on the basis of the water level at the water-gauging station Ai Nghia on the Vu Gia River in order to operate the A Vuong, Dak Mi 4, and Song Tranh 2 reservoirs.

If the Ai Nghia water level is lower than 2.53 meters, water must be discharged from these reservoirs at the rate of 12.5 - 25 cubic meters per second, according to the draft regulation.

However, hydropower plant investors and the Ministry of Industry and Trade have insisted on storing water for power generation, adding that water should be let out in limited volumes only.

The industry ministry and the industrial park development corporation IDICO, owner of the reservoir Dak Mi 4, have suggested lowering the rate to 3 - 8.5 cubic meters a second.

Discharging 12.5 – 25 cubic meters per second during the dry season may cause great damage to the production of electricity and a waste to natural resources, IDICO argued.

Meanwhile, the People’s Committee of Da Nang City proposed emitting 25 cubic meters of water a second during the dry season.

It also suggested reservoir operators should send out water when the water level at Ai Nghia is lower than 2.8 meters, not 2.53 meters as stipulated in the draft regulation.   Bay, the water management head, said that discharging 12.5 – 25 cubic meters per second in the dry season will be logical to ensure residents’ production as well as preserve the environment.

“We will keep on adjusting the draft regulation and only submit it to the Prime Minister for approval after Da Nang has agreed to it,” confirmed Lai, the deputy environment minister.

Vietnam has shut down 167 small hydropower plants in the Central Highlands, boasting a total output of 617.4 MW a year, and canceled 75 other hydropower projects.

Now, the Central Highlands region has 118 hydropower plants still in operation, producing a total of 5.8 MW a year.

In return for the construction of hydropower plants, the Central Highlands has lost over 22,000 hectares of natural forests and had 26,000 households relocated.