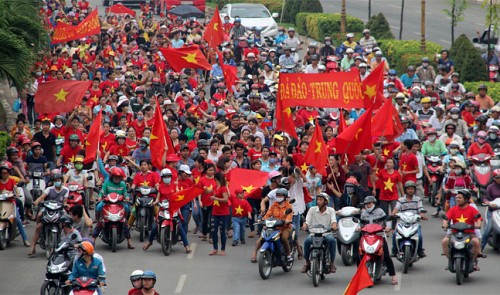 Police in southern Vietnam’s Binh Duong Province have captured hundreds of aggressive people who are suspected of taking advantage of peaceful marches against China’s illicit placement of an oil rig in Vietnamese waters to cause public disturbance and destroy property since Tuesday, Vo Thanh Lap, an industrial park management chief told Tuoi Tre on Wednesday.

More than 440 such violent people have been nabbed since riots erupted in the province yesterday, Lap said, adding that these hooligans damaged corporate assets, looted property, and even attacked police officers.

Lap is the head of the management board of industrial parks in the southern province of Dong Nai. He revealed the number after meeting with Taiwanese, Chinese, Korean, and Japanese investors the same day.

Riots spread from Binh Duong to Ho Chi Minh City and Dong Nai Province, he said, divulging that over 100 have been arrested in the former and 86 others nicked in the latter.

The Binh Duong authorities have called on people to keep calm, act with restraint, and not to be incited to commit illegal acts, the provincial People’s Committee said in a statement released today.

The committee has also instructed that local police resolutely crack down on those who made use of the peaceful marches to cause public disorder and damage property of residents and enterprises.

According to the statement, hundreds of enterprises in Binh Duong – most of which are owned or managed by Chinese, Taiwanese, and South Koreans – had their assets destroyed during the chaos as of 1:00 am on May 14.

At least 15 factories were set on fire, causing losses worth billions of dong, and leaving thousands of workers at risk of losing their jobs.

Tran Van Nam, deputy chairman of the Binh Duong People’s Committee and the province’s spokesman, said some people had took advantage of the peaceful demonstrations to incite local workers to go on strike and ravage corporate assets in the locality.

Specifically, some thuggish people stormed into the factory of Diamond Company at My Phuoc 1 Industrial Park in Ben Cat Town late Tuesday when they smashed valuable items and broke glass windows before setting them all on fire at around 5:00 am on Wednesday.

Tens of factories at Vietnam-Singapore Industrial Park 1 (VSIP 1) and Viet Huong Industrial Park were also set ablaze. Some people even took advantage of the riots to steal assets from the companies at the parks.

From 2:00 pm to 3:30 pm on May 14, many aggressive people blocked traffic on a section of National Highway 13 where the main gate of VSIP 1 is located.

A seven-seat car heading to Ho Chi Minh City from Binh Duong was stopped by some thugs who thought that the people inside were Chinese.

However, those in the car were allowed to continue their journey after the hooligans realized that they were South Koreans.

A large number of anti-riot policemen have been deployed to several hotpots in the province to restore public order.

Over the last days, many people in Binh Duong have marched peacefully along many streets and industrial parks such as VSIP 1, Viet Huong Industrial Park, Song Than 1 Industrial Park, and some other industrial clusters to oppose the deployment of Chinese oil rig Haiyang 981 in Vietnamese waters on May 1.

The rig is now located at 15°29’58’’ North latitude and 111°12’06’’ East longitude in the East Vietnam Sea, within Vietnam’s exclusive economic zone and continental shelf, according to the Vietnamese Ministry of Foreign Affairs. The rallies received special attention and support from local residents, Le Thanh Cung, chairman of the Binh Duong People’s Committee said, noting that the provincial government will coordinate with the Ministry of Public Security to strictly punish those who took advantage of the peaceful demonstrations to smash windows, steal assets, or commit other lawbreaking acts. Local authorities have called on people to comply with laws while conducting such demonstrations, and will take measures to ensure safety and property for investors at provincial industrial parks.