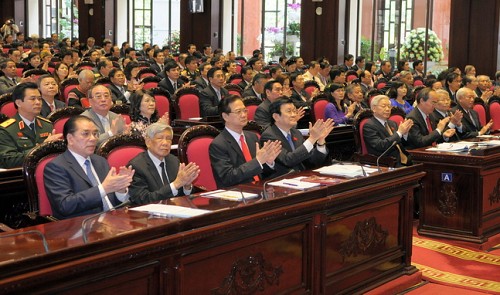 Many Vietnamese National Assembly (NA) deputies urged the legislative body on Tuesday to give out a resolution on the East Vietnam Sea situation that has become tense after China illegally placed its oil rig Haiyang Shiyou 981 in Vietnam’s waters early this month.

On the sidelines of the 7th session of the 13th NA that opened in Hanoi on May 20, Tuoi Tre (Youth) newspaper recorded many opinions from NA deputies and others about what the NA should do to cope with the illegal operation of the rig in the Vietnamese waters. Historian Duong Trung Quoc, a NA deputy of southern Dong Nai Province, said a resolution on the East Vietnam Sea will have a positive influence on Vietnam’s current diplomatic efforts requesting that China remove the rig from the Vietnamese waters. “I agree with those who have proposed that the NA issue a resolution on the East Vietnam Sea situation to show a formal and clear point of view from Vietnam, as the legislature represents the voice and aspirations of the entire Vietnamese people,” Quoc said. “We Vietnamese have always loved peace and maintain friendliness with every nation in the world, but we will also not yield to any actions that infringe our country’s supreme rights and interests,” Quoc said. Sharing the same view as Quoc, Tran Du Lich, deputy head of the NA delegation of Ho Chi Minh City, said, “We support the opinion that Vietnam should settle disputes in the East Vietnam Sea by peaceful means, but will make no concession to sovereignty violations.” The government’s report about the situation in the East Vietnam Sea showed that China’s acts go against what the region and the world expect for the sake of security in the sea area, Lich pointed out. “The government has manifested a strong attitude toward China’s violation, so I think it’s time for the NA to show the same,” he said. Similarly, Dang Van Phan, chairman of the HCMC Geographical Association, said, “I request that the NA issue its formal announcement about the East Vietnam Sea situation. As the legislative body representing 90 million of people, the NA must voice its strong protest against China’s illegal oil rig and demand that China withdraw the platform from Vietnam immediately.” Meanwhile, Nguyen Ba Thuyen, deputy head of the NA’s delegation of the Central Highlands province of Lam Dong, said if China refuses to remove its rig from the Vietnamese waters, Vietnam should sue China to international courts for its sovereign violation. Earlier, when addressing the opening meeting of the NA’ session, NA Chairman Nguyen Sinh Hung said that by placing its rig in Vietnamese waters, China has seriously violated Vietnam’s territorial sovereignty and the 1983 United Nations Convention on the Law of the Sea (UNCLOS). “The NA will hear and discuss the government’s report about the current situation in the East Vietnam Sea and will give opinions about this issue on the spirit of struggling to safeguard the national sovereignty by all means,” the chairman said “Peace and security [in the East Vietnam Sea] is being threatened,” he added. Beijing has stationed the oil rig at 15°29’58’’ North latitude and 111°12’06’’ East longitude in the East Vietnam Sea, which lies well within the Southeast Asian country’s exclusive economic zone and continental shelf, since May 1, despite protests from the Southeast Asian country.