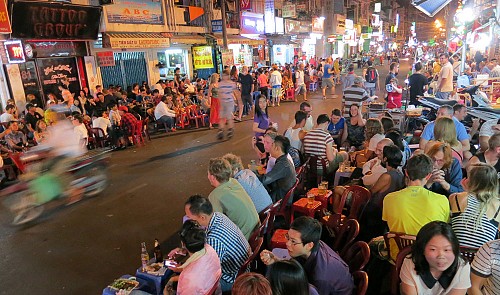 Sidewalk beer vendors on Bui Vien Street in the Pham Ngu Lao backpacker area in downtown Ho Chi Minh City have resumed their normal operations after some of them staged protests on two consecutive nights, July 21 and 22, against local police for allegedly disrupting their business.

On these nights, police met with angry reactions from many beer vendors, their employees, and even some of their customers when the police seized their chairs.

As seen in footage posted on Youtube, some of the vendors lay down in front of a police truck and a bunch of people gathered around to protest against the seizure.

According to Thuy, the city authorities enforced a rule to ban all business operations on sidewalks in the backpacker area starting from March 15.

Beer vendors then appealed for a more sensible policy, saying that they have to make their living, the woman said.

The vendors and local authorities later agreed on a solution whereby the former are allowed to put chairs on the sidewalk when their shops are crowded with customers, she elaborated.

“No one wanted to cause disturbance. Since we were frustrated with the way they dealt with it, we felt the need to raise our voice and protect our assets,” Thuy explained.

Since sidewalk shops in the area were forced to be shutdown, beer vendors have seen a massive drop in revenue, sometimes up to 50 percent.

It is not uncommon these days that foreigners have to place their beer bottles on newspaper sheets on the sidewalk on Bui Vien Street instead of sitting in a chair to drink as they did before.

“The police sometimes came to confiscate chairs when foreign visitors were drinking beer. The visitors got much surprised by such confiscation and they did not come again as a result,” Sau, who has been running a sidewalk beer shop on Bui Vien for 10 years, told Tuoi Tre (Youth) newspaper.

“Our turnover has sharply plummeted by 50 percent over the last four months,” she lamented.

He explained that police had to launch a crackdown on sidewalk shops to ensure public order as well as the safety of visitors because drug sales are still rampant in the area.

The deputy chairman added that all of those with extreme reactions had encroached on the sidewalk to expand their business.

According to Hieu, a law enforcement officer was hospitalized after being attacked with tear gas sprayed from a stranger during the protests on those nights.

Hieu said local authorities will continue propagandizing and convincing locals to comply with the city regulations. The municipal government has also pledged to facilitate them running their business.

Last year the people living in the backpacker area urged the municipal government to create a pedestrian zone for visitors.

A survey conducted by the city People's Council in September last year, which polled 300 local families, showed that 95 percent of them wanted to run their business on the sidewalk.

Hieu said the city government is seeking public views to turn busy corners in the area into pedestrian-friendly streets.

Visitor Alex Popplewell from the UK said the police did no wrong to clean the street up because running businesses on the sidewalk violates laws. But Popplewell added that the sidewalk business is part of nightlife culture here and hoped the government will have solutions to maintain it.

A Polish couple said that there are separate zones for visitors and sidewalk shops in Poland, adding it is not difficult to ban vehicles traveling to Bui Vien.