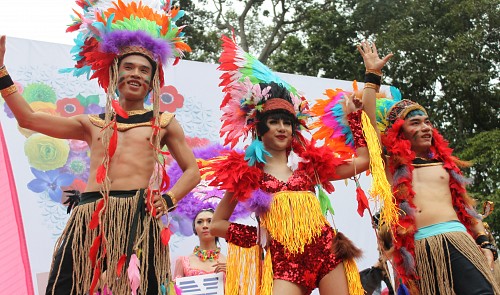 Over 2,000 people attend event for LGBT community in Vietnam hub

More than 2,000 people gathered at the Labor Culture House in Ho Chi Minh City on July 20 to join an event dedicated to Vietnam’s LGBT (lesbian, gay, bisexual and transgender) community.

The Viet Pride 2014 event attracted thousands of participants who excitedly partook in many activities including film screenings, talk shows, and music performances beginning early Sunday morning at the venue.

According to Huynh Minh Thao, communication and service manager of the Information Connecting and Sharing organization which assures and supports the LGBT community rights in Vietnam, the event aimed at promoting homosexual’s and bisexual’s self-confidence as well as calling for support from the society and people who do not belong to the LGBT community.

“Through Viet Pride 2014, we hope that LGBT people will always have a positive attitude to live their lives to the fullest, contribute good things to the society as well as give a hand to those in need of help,” Thao said.

Josh Black, an expatriate from Scotland who joined the LGBT event for the first time, expressed his optimism that the LGBT community in Vietnam would be well-developed in the near future.

“I used to attend an event for the LGBT community in London and it was different from that of Vietnam as people drink and get drunk. Here, people only dance and sing to celebrate their day but the atmosphere is still exciting and interesting,” he shared.

Viet Pride 2014, an annual event organized for the third time by the ICS in Vietnam, is slated to be held in 17 cities and provinces from July 18 to August 3.