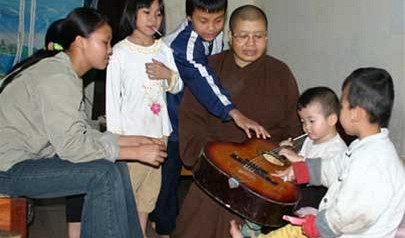 Authorities of Hanoi’s Long Bien District have requested that local police launch an investigation into whether children have been sold for adoption at Bo De Pagoda as rumored recently.

The request was made by Do Huy Chien, deputy chairman of the Long Bien People’s Committee, at a press conference held in the capital by the Propaganda and Education Commission of the Hanoi Party Committee on Tuesday, the Vietnam News Agency reported. The district authorities have asked local police to coordinate with other competent agencies to verify the rumor that children have been traded at Bo De Pagoda, located in Bo De Ward, Chien said.

The public has been stirred up since early this month, when some newswires and social networks published a rumor saying that Bo De Pagoda has become an “intermediate channel” for selling orphans to others for adoption purposes, Chien said.

Accordingly, for each child being adopted, the pagoda received hundreds of millions of dong (VND100 million = US$4,700) from the adopter, according to the rumor.

This is a complicated and sensitive case that needs to be clarified by a police investigation, the official said. “For the time being, while pending a conclusion from the police, we cannot confirm whether or not children have been traded at the pagoda,” he stressed.

However, middle-ranking bonze Thich Dam Lan, the abbot of the pagoda, has rejected the allegation that the pagoda was an intermediate channel for the trading of children for adoption.

As of July 16, the pagoda was home to 145 orphaned, abandoned or disabled children and helpless old people, the middle-ranking bonze said.

The pagoda’s support for these unfortunate people has been done out of humanitarian purposes, the Buddhist dignitary said.      Recently, the authorities of Bo De Ward and the ward police also rejected the accusation, saying that this rumor had previously existed and police of the district and the capital city had investigated and concluded that it was wrong.