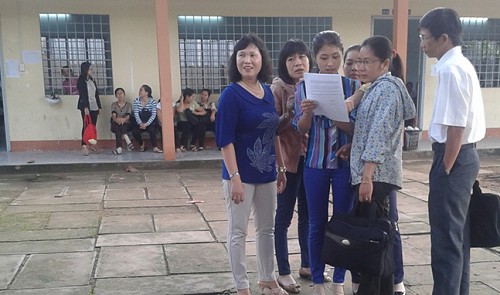 Authorities of a province in the Mekong Delta have said they will request that a regulation that penalizes English teachers who fail to meet European standards be lifted, following teacher complaints.

The People’s Committee of Ben Tre Province confirmed on Monday that it will instruct the provincial Department of Education and Training not to discipline local English teachers who do not pass a qualification test that follows European benchmarks.

More than 200 English teachers in the locality sat for the test on July 21 and 22. This test is part of the “National Foreign Languages by 2020” project of the Ministry of Education and Training, which has the goal of setting standards for English teachers throughout Vietnam.

According to the project, elementary and middle school English teachers must meet the third-highest skill level (B2) of the six-level Common European Framework of Reference for Languages while high school teachers must achieve the second-highest standard (C1).

Before the exam, the teachers attended a one-week express training course held in Ben Tre City, the provincial capital, to complete the First Certificate in English (FCE), an English language examination provided by the Cambridge English Language Assessment.

The certificate is equivalent to the B2 level of the European framework.

According to the department’s regulation issued this month, teachers who do not pass the exam after the express course will have the chance to join another class and take a retest.

If they still cannot pass the retest, they have to pay for the course, while teachers who quit the course will be disciplined.

At a working session with a delegation from the Ministry of Education and Training on July 21, the department admitted that its dispatch regulating penalties are “unreasonable” and said it will withdraw the document.

Earlier, the director of the Ben Tre Department of Education and Training, Le Ngoc Buu, said local teachers attending the course on the state budget have a responsibility to study efficiently and pass the exam. They will be disciplined if they fail to do so, Buu added.

“We are upset because the educational department puts all the fault on teachers if we fail, although we have studied hard. A teacher who gave birth only a month ago also attended the class. Now we pray that we pass the exam,” a teacher in Mo Cay Bac District shared after he finished the first subject of the exam on July 21.

Nguyen Van Huan, deputy director of the department, said the department issued the regulation with the aim to strengthen the teachers’ work ethic.

“However, the penalties are quite harsh compared with the advantages and disadvantages of the teachers attending the training course. That’s why the department will report the situation to the provincial People’s Committee and will ask to scrap the regulation on penalties on teachers who fail the exam,” Huan said.

Tran Ngoc Tam, deputy director of the Ben Tre People’s Committee, has confirmed that the education department cannot force teachers to pay for the course based on the result of the test.

“Although the department’s desire to improve the quality of the teaching team is good, we cannot rush the process,” Tam stated.