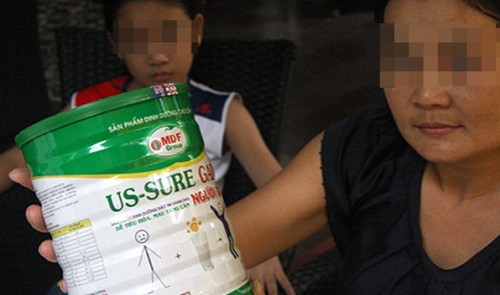 The Department of Education and Training of Mekong Delta province of Tien Giang has been asked to review the milk products fed to kids in the province-wide kindergartens following the discovery of a huge number of poor-quality baby formulas and nutritional foods.

The provincial Department of Industry and Trade is sending documents to its education counterpart to inform them of the substandard dairy products the market watchdog agency has recently detected.

“The education department is advised to direct preschools under its management to check if they have contracted with suppliers of these poor-quality products,” Do Van Phuoc, deputy director of the industry and trade department, said.

A milk product is highly suspicious if it is sold under fat commissions for the school managers, Phuoc noted.

All of them are manufactured by firms in the southern city, who are not popular or reputable dairy producers, the official said.

The poor-quality products have managed to sell to many preschools in the rural areas in the Mekong Delta province.

The managers of the schools said they chose to buy these products as their nutrition facts, as displayed on the labels, are similar to those of expensive baby formulas.

The bogus milk products are sold at cheap prices plus huge rake-off, sending many kindergartens to feed their kids with them.

The preschools said they will buy alternative products once receiving the official announcement of the Department of Education and Training regarding the issue.

Mien Dong JSC, a food company based in Ho Chi Minh City’s Binh Tan District, was Friday asked to recall two lots of its nutritional products under the name of baby formulas as they failed to pass quality tests.

Mien Dong Co has signed contracts to sell their nutritional foods to many preschools in Tien Giang and other Mekong Delta provinces, promising to offer hefty commissions that are worth 50 percent of the product values.

Phuoc from the industry department said the provincial market watchdog agency is completing procedure to impose fine on Mien Dong Co for violating the law on launching promotional campaigns.