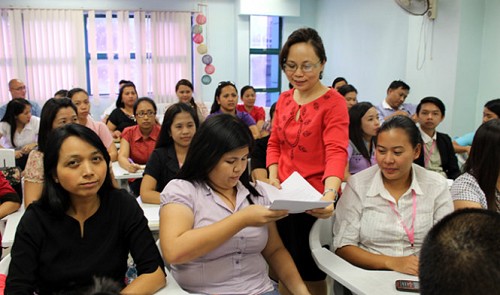 Many school heads in Ho Chi Minh City do not know why their wishes to have Filipino English teachers work at their schools again in the 2013-2014 academic year have gone unfulfilled by the city’s education board.

Last year, thirteen teachers from the Philippines were recruited to teach English at 28 elementary and middle schools in eight districts across the southern city.

The recruitment was part of a pilot program to help the students at those schools improve their command of English, according to the municipal Department of Education and Training.

The Filipino teachers then worked with local colleagues in the second semester of the 2012-2013 school year, and eventually received positive feedback.

Vietnamese teachers and school heads praised the foreign colleagues for their expertise, friendliness, and ability to adapt quickly to Vietnam’s education environment.

Many of the 28 schools that received Filipino teachers in the 2012-2013 school year thus called on the city’s education board to allow them to keep the foreign staff for the 2013-2014 academic year.

“The school heads had filed their proposal before the 2012-2013 school year even finished, but we weren’t sure why no Filipino teachers were sent when the new school year began,” Ngo Xuan Dong, head of the education and training bureau of District 7, told Tuoi Tre (Youth) newspaper.

In Vietnam, an academic year usually starts in late August or early September, and ends in late May or early June the following year.

A schoolmaster, who spoke on condition of anonymity, said he did not receive any announcement from the municipal education department that Filipino teachers would no longer be employed.

While speaking to Tuoi Tre in August, school heads said the pilot program had allegedly ended, but none of them knew why.

In late 2012, the Ho Chi Minh City education department was busy preparing to implement its ambitious program, which aimed to hire as many as 100 Filipino English teachers.

The plan ignited an intense debate among educators, school principals, and parents as to why the department had decided to employ Filipinos, instead of native speakers from the UK, the U.S., Australia, and Canada.

The department director, Le Hong Son, later explained that Filipino teachers have standard accents thanks to the fact that English is one of the two official languages of the Philippines.

They also demand a lower salary, a mere US$2,000 per month, compared to the $5,000 and $10,000 pay often sought by their Australian and British peers, respectively.

“Assessments by specialists from the department show that the foreign teachers helped improve the English command and accents of the students,” Hieu said.

The official added, however, that the program faced several challenges, including financial issues.

Hieu said the department did have plans to continue sending Filipino teachers to schools in the 2013-2014 school year, but some teachers were unable get a visa to Vietnam.

“The teachers and their families had their houses destroyed by the Super Typhoon Haiyan last November, so all of their papers were lost,” he elaborated, citing information from a Filipino manpower firm.

The Filipinos thus could not start teaching when the new school year began, due to what Hieu said was “an objective reason.”

“We decided to temporarily cease the recruitment of Filipino teachers, and allowed schools to hire qualified teachers from the UK, the U.S., or Australia,” he said.

Some Filipinos who taught at Ho Chi Minh City schools between 2012 and 2013 said they feel attached to the local educational environment.

However, some revealed that their monthly wage was not $2,000 as reported.

It was actually only around $900, one of the teachers said.