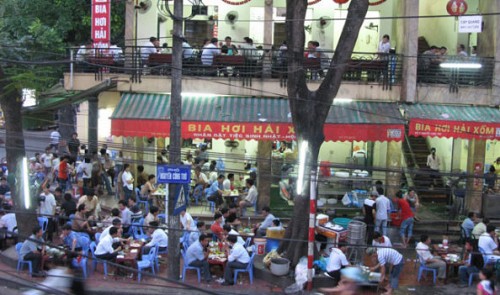 Beer products should not be served in places where the temperature is higher than 30 degrees Celsius, the Vietnamese Ministry of Industry and Trade has suggested, the latest in a series of controversial propositions it put forward about beer management.

While its other draft decree which oversees the sales of alcoholic products still generates opposition from beer makers and sellers, the ministry continues introducing the draft of another fiat, intended to ensure food safety in beer making and selling places.

Beer selling locations strictly follow regulations stipulated by the Ministry of Health for the sake of food safety, the trade industry demanded in the draft legislation.

These places must also be equipped with ventilation or air-conditioning systems to make sure that the temperature there will not be higher than 30oC, according to the document.

The ministry also set out detailed rules on how beer serving facilities should store their products.

Specifically, beer must be stored in a position that is at least 15cm away from the floor, while the respective proximities between it and the wall and ceiling are 30cm and 50cm, according to the draft legal document.

For those that serve bia hoi (fresh beer), they must have specific equipment to keep the beer cold all day, the ministry said.

Drinking beer in open spaces such as on the sidewalk or in beer gardens is most preferred by beer lovers in Vietnam.

The highest temperatures in Ho Chi Minh City this week have been around 31oC to 34oC, whereas the range for Hanoi is from 31oC to 32oC, according to data from weather forecasting service AccuWeather.

The new draft decree on beer safety was immediately confronted with a wave of objections from members of the public, who said it is yet another draft that lacks feasibility.

“So all beer selling places would have to install air cons in the summer to comply with the rule,” the readers mocked.

Earlier this month, the Light Industry Department under the Ministry of Industry and Trade took a proposed ban on selling beer on the sidewalk and several other controversial propositions out of another draft decree on beer production and consumption management.

The tentative ban was dropped after the department received negative feedback from beer businesses and associations.

The draft fiat no longer contains the clause that prohibits beer from being sold on the sidewalk, as well as stipulations that ban beer sales to people showing signs of being under the influence, or pregnant and breastfeeding women.

But it preserves the proposition that beer companies must place stamps on their products to fight counterfeits, warn drinkers of alcohol abuse, and prevent tax evasion, which local breweries have gone on deeming as a “costly regulation.”

It would cost Vietnamese breweries VND1.6 trillion (US$75.31 million) a year only to place stamps on their products, according to industry insiders.