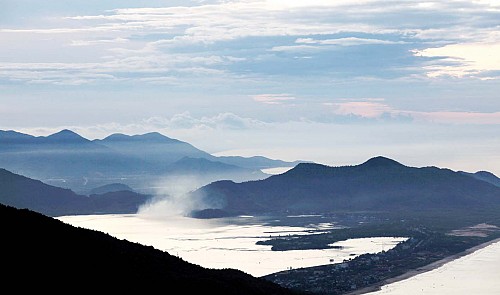 A jewel in central Vietnam – Part 1: A ride after a while

Editor’s Note: Stivi Cooke is an Australian expat who has lived in Hoi An Ancient Town in Quang Nam, a province in central Vietnam, for six years. In this four-part series written exclusively for Tuoi Tre News, Cooke will take you on a road trip from the town to Hue, the capital of Thua Thien-Hue Province, also in the central region. Hue is the former capital of Vietnam.

Never miss a chance to get out of town and go for a ride somewhere in Vietnam.

Urban Vietnam is less than a third of the true story of this nation, from the meandering Mekong Delta to shivery Sa Pa in the north. Road trips are an adventure and an education rolled into one – a glimpse into rural worlds that the western super high-tech uber-tourist is fast running out of opportunities to experience.

A week before the Hue Festival kicked off in the former capital of Vietnam some time ago, I was offered the chance to ride up from Hoi An to see Hue. Some Vietnamese friends were going away for the weekend and asked if I’d join them. Sure! I hadn’t been out on the road for an extended ride and felt I needed to find out how my nerves would handle the mountain roads and the scary traffic. So this tale is just as much about the ride as the destination.

I’m not much of a motorbike rider at the best of times. I only learnt to ride a motorbike six years ago on the terrifyingly manic back roads around Hoi An. On my third day riding a motor scooter, ever, I had to ride back to Hoi An in the surreal darkness of the quiet country roads and nearly had my first accident with a local riding without headlights on a road with no street lights. Yeah, brave little me.

Since that time I’ve upgraded to knee pads, elbow pads and a full face helmet. Locals giggle at the traffic lights before disappearing in a puff of smoke. I’m a slow rider too. Anything above 50 kilometers per hour still worries me after six years. If you want to call me a wimp, that’s fine – at least I’m not the one going 70 with an unstrapped helmet, smoking a cigarette while trying to read text messages with his two-year-old son riding the handlebars. He’s the tough guy…

We had about three days to do this before I had to get back to work so we left early on a Friday morning. I was to meet everyone else on the west side of Da Nang City, yet somehow lost everyone at about 8:00 in the morning. Yep, of course, I was wrong and everyone else was right. I’ve learnt to shut up about this in Vietnam. The day and my temper were warming up.

It was all to do with names and directions, yeah, yeah, you said this, and I thought you meant that… Can we get going now? I have a theory that Vietnamese can’t give directions because they’re omni-directional and roads are in the fourth dimension, so they just ignore that.

We had decided not to do the Hai Van Pass as we were not that great on motorbikes on the open road, which gave me the interesting experience of going through the tunnel not far from the outskirts of Da Nang at the base of the mountains looming over us. Interesting system – bikes go in a truck, us in a dirty, jam packed 18-seater bus – no bikes allowed in the tunnel.  With good reason, too, as the space inside is filled with diesel fumes, roaring motors and not a lot of room to maneuver, anyway. I’d truly hate to get stuck in there – Eck.

At the far end of the thirty-minute trip we roared downhill into Lang Co, and the view is stunning. It’s quite a small town, with one of the best water views I’ve ever seen. Across a lagoon, flat and glimmering in the mid-morning light, the mountain peaks, sharp tipped, craggy, pink, grey and brown in the distance, remind you of how formidable a barrier they were for centuries in both peace and war.

The picturesque town is home to oyster farmers, seafood cafés and the first of an endless line of truck stops with a sandbar stretching around the seaward beach, like a protective arm wrapping around a shoulder to comfort someone. The beach front is still fairly pristine and well worth the pit stop for nibbles, which we did. Windy but!

After smelling the fish drying in the sun and snacks, we headed out of town and straight up the mountains. It’s steep, but I’m told it’s not quite as much as the Hai Van Pass. The view looking back to Lang Co is true alpine territory, with the town in miniature at the edge and nothing but sheer mountainsides ahead.

Uphill, bikes have the obvious advantage over heavy trucks, and the camber of the road allowed us to calmly overtake with a reasonable gap - nothing to do but concentrate on the road. Some bends were tight, but at our speeds quite manageable. It seems the trick is to check what’s behind you before attempting the bends, or you’d be pinned against the cliff face by a turning truck. Reaching the top was rather funny, as it flattens out enough for a small shop front tucked into the hillside and a baby Billy goat to be slowly crossing the road. Silly me, I should have expected that obstruction.