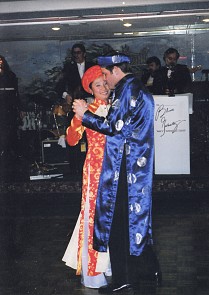 In praise of the ‘ao dai’ of Vietnam

Our kindergartener was thrilled. “I want to wear my ao dai!” he said. The kids and parents were all encouraged to wear the native clothing of their homeland for a celebration that included the march of 67 flags representing each nation here.

He used the northern pronunciation, much to the chagrin of his Saigon-born, California-raised mother. Not until we arrived in Hanoi did I learn how Vietnamese accents alter the sound of consonants, and how words I learned to pronounce “ow yai” (ao dai) became “ow zai” from northern lips. In his little royal blue tunic, our five-year-old boarded the school bus matching his Vietnamese Canadian neighbors, just three boys amid scores of culturally hyphenated children at UNIS. Our daughter, a sixth-grader, slipped into her ao dai too, even though this growing girl clearly needs a new one. (Our older boy, the skateboarding 8th grader, opted for the jeans-and-flannel look of a grunge rocker.)

My thoughts turn to the ao dai because of a recent Tuoi Tre article about a Vietnamese scholar who was visiting the U.S. to present a lecture on her country’s signature couture. I was reminded how seeing so many Vietnamese women and children in their ao dais on U.N. Day – and contrasting their look with the traditional, often vibrant fashion of other cultures – affirmed that Vietnamese are tough to beat in the presentation of feminine, silken elegance.

I am speaking of the contemporary ao dai – which translates as “garment long” – rather than the looser, less stylish sort we’d have seen a century ago. The American humorist Calvin Trillin once declared, “The banh mi sandwich is really the only good argument for colonialism.” The modern ao dai might be considered another, in my opinion, as the French influence could possibly have helped transform the traditional garment into an alluring style that accentuated and flattered the female form. As for the boxy male version, sometimes called ao gam, well… who cares?

As with many things Vietnamese, there are regional differences regarding the history and appreciation of the ao dai. The dress, scholars say, has always been more common in the south than in the north. Northerners, historically, were said to have more conservative fashion tastes. But the ao dai’s cause received a boost when one was worn during the Paris Peace Conference (1968-73) by the negotiator Nguyen Thi Binh of the National Front for the Liberation of South Vietnam. After the war, “Miss Ao Dai” pageants became popular in Viet Kieu communities overseas. And during the 1980s in Vietnam, many schools adopted the dress as uniform again, and a reported 16,000 attended a Miss Ao Dai Beauty Contest in Ho Chi Minh City. Overseas recognition came when the ao dai was awarded “Best National Costume” at the Miss International Pageant in Tokyo. According to Wikipedia, Thoi Trang Tre (New Fashion Magazine) “gushed” that Vietnam’s “national soul” was once again honored.

I was not so well-versed on the ao dai when, 15 years ago, my fiancée returned to Southern California from an extended visit to the land of her birth. She showed off the red and gold ensemble she had designed herself, to be worn at our wedding reception. For our bicultural ceremony in Little Saigon, I agreed to don the classic royal blue tunic as well.

My bride was simply stunning. As for me, the photos are not so flattering. In my ao dai, I looked about four months pregnant – and promptly went on a diet.

My wife’s wedding ao dai now hangs in the armoire in our bedroom, protected in plastic.

I can’t help but envision the day, some years from now, that our daughter will try it on, perhaps for a very special occasion.