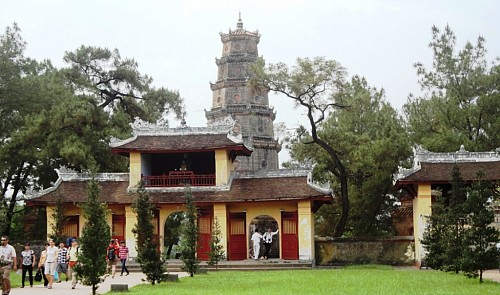 Editor’s Note: Stivi Cooke is an Australian expat who has lived in Hoi An Ancient Town in Quang Nam, a province in central Vietnam, for six years. In this third part of a four-part series written exclusively for Tuoi Tre News, Cooke indulges in the culture of Hue City after a long road trip from Hoi An. Hue served as the imperial capital of Vietnam in the past and is now the capital of Thua Thien-Hue Province.

>> A jewel in central Vietnam – Part 1: A ride after a while

Having finally made it to Hue, four hours on a motorbike from Da Nang including pit stops, it was time for a beer!

I don’t know what I expected – castles soaring into the clouds – huge city walls ringing the city – some sort of grand entrance. Nope – just roaring into the suddenly crowded roads swerving left, right and center. My friends giggled as they tried to match the GPS to the reality.

We arrived at the hotel a block from the Song Huong (Perfume River). Although we couldn’t see the river from our el cheapo balcony, the streets were impressively clean, wide and amazingly clear of motorbikes. The streets are quite ‘walkable’ around most of the city, uncluttered by bad parking. Hue has a sense of calmness about it. Sure there’s the bustle of traffic, yet the noise level of Hue is notably lower than in Da Nang or Ho Chi Minh City.

The Citadel is only a short taxi ride on the north side of the river with the old city. Founded by the Nguyen Dynasty, it’s an interesting site. Walking around the old grounds, you can imagine the emperor yelling ‘off with his head’ or some such thing. I loved the old trees and flower work and wood paneling. Nice backdrops for selfies. Shame that the American war destroyed part of the grounds, yet thankfully there’s a lot to see.

Preparations were supposedly going on for the Hue festival, but all I saw were handfuls of workmen idly sweeping the pathways or playing cards in a back corner of the grounds.

Hue is known for a lighter style of cuisine than other cities, although there’s a lot of spice, particularly chili, in the local dishes, and of course, seafood and sweet soups.

After the Citadel we headed off to eat – naturally the cabbie thought his recommendation was great and my friends had bánh bèo (Vietnamese savory steamed rice cake) and chả cua (crab egg and meat cake). I had to laugh as they complained about the quality of the food and the prices – I must remember to thank the taxi guy some day.

It’s the contrast between the young, smart, sassy Vietnamese roaring past on new, shiny bikes and the travel-weary tourists hardly smiling that gets me. Plaited, long-haired hippies in flip-flops tucking into expensive burgers, well-heeled Europeans sipping wine with steamed rice or tour groups struggling with a menu huddled in a corner busy translating it with a smartphone.  At least there wasn’t a silly backpacker with the Lonely Planet guide and a hundred kilos of clothes wandering around lost…

Sipping another beer, I wondered about travelling. Funny how some people get right into it – exploring it all – while others collapse after an afternoon strolling around Hue’s riverside parks and gardens.

Next morning we headed up to Thien Mu Pagoda, the unofficial symbol of ancient Hue. It’s a grand multi-tiered, seven-story tower located on a hilltop overlooking the western stretch of the Perfume River not far from town. The gardens inside are cool and windswept from the coastal shore, with large pine trees and a great view looking back at the city. Now a Buddhist site, the bonsai plants and floral work compliment the peacefulness.

Still, you gotta wonder about people running around taking a million selfies with ‘V’ fingers, hardly taking in the atmosphere and all the magnificent work put into the site. Did they really have to travel thousands of miles just to look stupid in a photo? Sometimes I think smartphones are ‘dumbphones’…

The royal cemetery a little further up the road is worth a look as well. While small, its weather-beaten sculptures remind you more than the Citadel that this was once a kingdom. As you look out over the river, you can see the high river banks and the western lands leading to the mountains. This was a kingdom built on agricultural wealth and it still holds true today for Vietnam.

Next, the Dong Ba market, and then time to hit the road again.