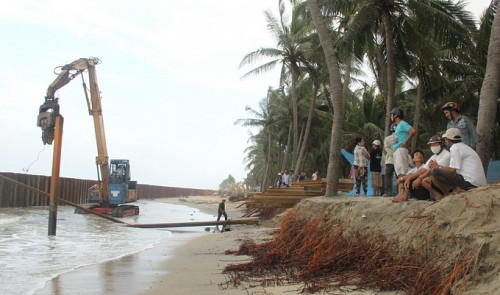 A stunning beach along the coastline of a province-level city that houses a UNESCO-recognized old town in central Vietnam is being eroded by sea water at an alarming rate and could disappear altogether.

Cua Dai Beach, which is a gem of Hoi An City's tourism industry and a major draw to international tourists, is being wiped out by sea waves.

According to Le Van Thanh, a local, over 30m of land has been swallowed in the past two months while three rows of coconut trees were blown away, which has seriously deformed the beach.

The entire area has been blockaded, with signs erected to warn tourists not to swim.

Cua Dai Beach is part of a 3km stretch of coastline which is under grave threat from coastal erosion.

Located in Quang Nam Province, Hoi An City includes the famous Hoi An Ancient Town that was declared a World Heritage Site by UNESCO in 1999.

The alarming coastal erosion has dealt a devastating blow to the owners of the luxury resorts along the coast and adversely impacted their business.

The owners of two resorts with investments worth several hundred billion dong (VND1 billion = US$47,000) each are on edge as construction has been suspended due to erosion.

Among them, the Fusion Alya Resort has sustained the most damage.

Construction of the resort was almost completed when up to one-third of the site was swallowed by waves, bringing work to a complete standstill.

A 5m-high dyke built by the owner was engulfed, causing the building nearby to give way.

Sea water is on the verge of encroaching on the resort’s four buildings.

More than ten buildings at the nearby VP Hoi An Resort face a similar fate.

Work on the resort has been suspended, although several structures have already been built.

A local official said Tuesday that the resort area has incurred the most severe devastation, though the owners have taken matters into their hands by building dykes at their own expense.

As Tuoi Tre (Youth) newspaper reporters observed on Wednesday morning, dozens of 10m-long steel poles were being erected in the area to act as dykes.

Nguyen The Hung, of the Hoi An City People’s Committee, lamented that the damage is an irreversible loss to Hoi An’s 7km-long coastline and its two beaches.

Hung added that the city government has spent a whopping sum on efforts to save the beaches, but said they only came up with temporary solutions to brace for the coming rainy season.

The official noted that though coastal erosion occurred in previous years, the extent of damage has never been such a grave cause for concern.

At one point up to 10m of land was lost in two days, he added, saying that what is left of Cua Dai Beach is unrecognizable compared to what it was three months ago.

Van Phu Chinh, of the Ministry of Agriculture and Rural Development, told Tuoi Tre that the unseasonal erosion, which has occurred in a season with no storms, needs thorough study and assessment.

He noted that the causes of erosion remain inconclusive due to a lack of data.

“The erection of hard dykes means we will lose the coast. A feasible long-term solution is building appropriate dyke sections to reshape the beach, which is a time-consuming process,” Chinh stressed.

Hung, of the Hoi An City People’s Committee, added that the city has spent nearly VND20 billion ($941,354) on the erection of iron poles and dyke sections as a temporary solution.

“The beaches make up half of Hoi An’s tourism appeal, so the loss of Cua Dai Beach will adversely impact the city’s economic growth,” he noted.

Hung added the committee has appealed to the provincial People’s Committee and the central government for additional funds for soil retention efforts and to summon experts.

Hanoi has apparently become a magnet for global luxury carmakers as three major industry players have already opened, or plan to open, showrooms in the capital city to mark their official presence in Vietnam