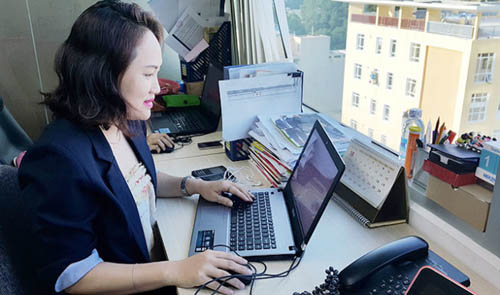 Settling down on the ground not easy for Vietnam air hostesses

Most Vietnamese stewards and stewardesses choose to train themselves or prepare to find another job even when they are still working for their airlines.

There is no cap on the age of flight attendants, but in reality only a few people work the job for long.

State-owned Vietnam Airlines once set the maximum age for air hostesses at 38, and 42 for their male colleagues, but the rule was abolished in 2010 when the airline joined the SkyTeam alliance, based in the Netherlands.

Most air hostesses stop flying after they get married and find a new job on the ground to have more time with their family.

People in the industry often talk of an ‘unwritten rule’ that those who can fly for seven consecutive years can do the job their whole life, meaning that few hostesses can reach that limit.

Some become stressed when they cannot find a job with stable working hours on the ground after quitting flying.

It sounds simple, but this is an issue most stewards and stewardesses admit they have had to struggle with.

Minh Tam, 31, is one of the first eight Vietnamese air hostesses to work for Korean Airlines of South Korea. She moved to Vietnam Airlines and worked for it for four years before she got married and quit the job in 2010.

It was a milestone in her life to ‘settle down on the ground’ because she was not mentally used to the new life and did not want to do anything.

After 30 days of travel, she admitted she was deeply stressed upon returning to Vietnam.

Within less than two months of a probationary period at a hotel, Tam decided to quit because she was so tired of working in shifts at a low salary.

“I was worried and feared that I may not be able to get used to life on the ground,” she recalled.

Following the advice of her fiancé, she enrolled in a course in administrative management and was admitted into a real estate firm from Singapore as a legal secretary.

“It was difficult to adapt to the new life after spending a lot of time working in the sky,” Tam said. “I always wonder why Vietnamese people seem so strange since they don’t unite and often bully newcomers.”

She said she was tense initially, but things were getting along well after half a year.

“When I began working for the real estate firm, I cleaned the toilet’s glass window and suddenly realized that it’s not necessary since I was no longer in a plane,” Tam added.

Diem Quynh, a former Vietnam Airlines air hostess, also chose to quit flying even though she was so fond of it that she landed less than 12 hours before her wedding party.

She returned to Hanoi after a flight from Germany in the early morning to prepare for the party in the evening that same day.

But she decided to quit the job after five years because she had no time for her child and husband, even when they got sick.

“I received a phone call from home that my child had been admitted to a hospital emergency room when I was in Russia.

“I was absent from important moments in my son’s life, such as his first steps and his first teeth. So I decided to quit the job,” Quynh said.

“I almost go crazy when I see my former colleagues flying and I know I am still eager for the job,” she said, adding that it is not good for her family anyway.

But many air hostesses have experienced financial problems, especially after flights to shopping paradises such as New York, Las Vegas, Singapore and Hong Kong, Quynh said.

Tran Minh Long, a steward, is a bright example of someone who made careful preparations before quitting his job.

He decided to fly regular long-haul flights to Australia, where he enrolled in a course in hospitality.

After several years, he graduated from the course and is now the owner of a coffee shop in Ho Chi Minh City.