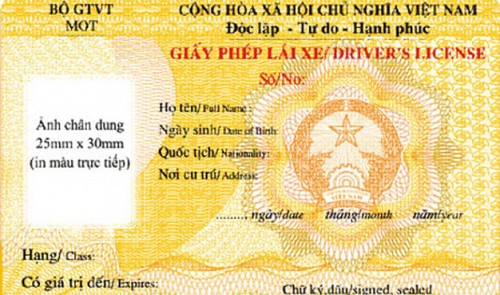 Vietnam to issue driver’s licenses valid in over 70 countries

Vietnam and other members of the 1968 Vienna Convention on Road Traffic will mutually recognize international drivers’ licenses issued by their respective competent agencies as of January 1, 2015, a senior Vietnamese traffic official has said.

Deputy director of the Vietnam Road Administration (VRA) Nguyen Van Quyen made the statement in a recent interview with the Vietnam News Agency.

According to an international cooperation program on road traffic, the Ministry of Transport last year directed the VRA to set up a plan including all necessary preparations to implement the convention, Quyen said.

Under the plan, Vietnam will recognize and allow driver’s licenses issued by other country members of the convention to be used in Vietnam, he said.

That means holders of such licenses will not be required to obtain a Vietnamese-granted driver’s license, the official said.

In return, Vietnamese people who intend to travel to, or are living abroad, and wish to use their Vietnam-granted driver’s license in foreign countries will be granted an international driver’s license by competent agencies, Quyen said.

Vietnam-issued international driver’s licenses will be presented in Vietnamese with translated versions in a number of popular languages including English, French, Russian and Chinese.

Currently, the United Nations has agreed to allow Vietnam to join the Vienna Convention on Road Traffic as the country has already completed necessary procedures, the official said.

The granting of international driver’s licenses under the convention will mark a landmark in Vietnam’s integration into the community of countries that are already party to the agreement, he said.

The mutual recognition of driver’s licenses will benefit all license holders when they travel to or live in any of the member countries of the convention, he added.

The Vienna Convention on Road Traffic is an international treaty designed to facilitate international road traffic and to increase road safety by establishing standard traffic rules among the contracted parties.

The convention was agreed upon at the United Nations Economic and Social Council's Conference on Road Traffic (October 7– November 8, 1968) and concluded in Vienna on November 8, 1968.