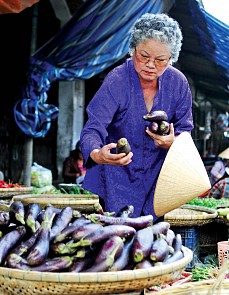 Editor’s Note: Stivi Cooke is an Australian expat who has lived in Hoi An City in Quang Nam, a province in central Vietnam, for six years. In this last part of a four-part series written exclusively for Tuoi Tre News, Cooke retells his experiences on the way back from Hue City to Hoi An after a road trip there. Hue served as the imperial capital of Vietnam in the past and is now the capital of Thua Thien-Hue Province in the central region.

>> A jewel in central Vietnam – Part 1: A ride after a while

Before finishing our road trip to Hue and returning to Da Nang [to the south of Hue], we hit Dong Ba market. It’s the thing to do when you are with Vietnamese travel mates. Well, at least that’s what I thought.

Markets are fun, noisy, crowded and interesting. Although most Vietnamese stalls look the same after a while, it’s still fascinating to watch stall owners bark on the phone, gossip, haggle with each other and eat constantly. Where do they actually find time to make money?

Wandering upstairs we caught glimpses of seafood drying on the stall roofs, mountains of toilet paper waiting to be bought, kids running everywhere and of course, shouting. It took me almost a year after living here to work up the courage to shout my order from the back of the line in the supermarket or push in to get served.

Markets, however, are a different story. It’s the art of avoiding stall owners grabbing your arm, urging you to buy something or the trick of dodging that beady-eyed manager planning to block your way. Thanks, I’ve learnt to snarl ‘Khong mua’!

If you check my Facebook page you’ll see the large nón lá (conical hat) that I bought there. I love those hats, brilliant in the rain – no water down your neck – and great for letting the breeze flow past your hot face. Viva nón lá!

With time running short to hit the road, we headed down to the restaurants. Hue has a number of small, inhabited village islands that offer cool, shaded cafes for a quick bite of lunch. Again, my friends thought it wasn’t much to recommend, yet again it was surprising to see how well the Vietnamese can do with such small areas to work with. You have to admire the way Vietnamese can find a way to use all the available space around them – particularly for making money!

Roaring out of town on the wide dusty highway, petrol and drinks became the order of the day. Traffic was heavy heading south to Da Nang and more hair-raising as we seemed to hit the major peak-hour for container trucks. Hugging the edge of the road, there were a dozen times when I just couldn’t look at how close those huge wheels came to my handlebars or the ginormous wobbling container boxes towering over the bike. It became a trick to check the side mirror, estimate when the truck would be alongside and find space for me. It got pretty hairy sometimes!

We had time to stop and look around the deep green rice fields while resting our cramped hands and legs. Most of the highway is still a single lane each way so the potential for trouble between the large, wide trucks and the bikes was always on my mind. Watching the zillion bikes whizzing past, I was thankful that we hadn’t seen any terrible accidents during the entire trip.

Over the mountains, knowing now where the good spots were, we became snap-happy, clicking the valleys below, the peaks above and the sea in the distance. No road trip is complete without memories to bore people with back at the local pub!

One lovely discovery was the beach line behind Da Nang after the Hai Van pass tunnel. I didn’t notice it on the way up to Hue. Arriving back in mid-afternoon, there were dozens of small cafes selling drinks on a Sunday as people gazed back at the city. The view is something else, all skyscrapers (or what passes for that here) and hotel blocks twinkling in the setting sunset light set against a great flat sea blowing cool air up to the cafes. I love seeing the Vietnamese relax and just chill out, instead of rushing all over the place. I’ll be back to check it out again later.

Departing Da Nang, amid ‘Hẹn gặp lại’s!’ (See you again’s!) and dodging the city’s truly demented traffic – too fast and too undisciplined to keep a straight line for more than five seconds – the fatigue started to set in on the run back to Hoi An. I almost got hit by a stupid car racing towards Hoi An as my concentration was beginning to waver and I pulled over for a moment to gather my wits again. Ah well, at least I was used to that!

We’d been lucky enough to have an adventure without mishaps, managed to stay friends and see some good stuff. Along the way we’d seen something the ‘road life’ of Vietnamese making a living from the great highways of this land – and I wish them luck with that in the future. For all the rapid changes going on around the nation, it was satisfying to see some of its heritage and history, not just in Hue, but dotted along the highway, the temples and pagodas and the old cemeteries.

And everywhere, always, that big cheeky grin and cheerfulness that make the charm of the people of this nation.

I’ll do another road trip someday soon but not until I’ve found the maps buried somewhere in my office.