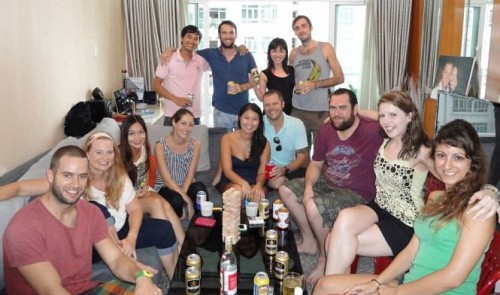 Expat teachers in Vietnam – Part 2: Why they come

Ease of finding a well-paid job, a comfortable and affordable cost of living, and an interesting culture are some major reasons for scores of foreigners from across the globe to come to Vietnam to work as teachers.

>> Expat teachers in Vietnam – Part 1: The story of Robert Ackley

Many expats from western countries told Tuoi Tre (Youth) newspaper that they see coming to Vietnam as a chance to explore Asian culture because it is easy for them to earn money from teaching to travel to other countries around the continent.

Natalie Markides, who was born in Cyprus and graduated from Manchester Metropolitan University in the United Kingdom, said that she wanted to work in a Southeast Asian country to travel around Asia after finishing university.

“I picked Vietnam because when I researched the job prospects, it appeared that it was better paid for teachers in comparison to other countries such as Thailand,” she said.

“I also thought that as Vietnam uses an alphabet script similar to English, that would make it easier for me to adjust in terms of daily life,” the young woman, who is currently teaching English to fifth graders at public schools in Ho Chi Minh City, elaborated.

Chris Roll used to be a primary school teacher in the U.K. and came to Vietnam in 2009 to teach English at ILA English Language Center in Ho Chi Minh City. Before Vietnam, Roll had spent four years teaching English in Africa.

“I know Europe and Africa quite well but I did not know Asia. I wanted to go and live somewhere in Asia just because that would be a new experience for me. My friend recommended Vietnam, saying that Vietnam is a lovely country,” Roll said.

Meanwhile, Timothy Connell, who has been a physical education teacher at the American International School in the city for the last seven years, told Tuoi Tre, “I just wanted to travel around Asia, but when I arrived in Vietnam, I fell in love with the local culture right away and decided to stay longer,” the Aussie said.

A low cost of living is another main reason why many expats decide to come to Vietnam for teaching. “I was only able to save about 20 percent of my income from teaching back home but in Vietnam, I can save up to 50 percent. I use part of the income to support my family and pay loans that I obtained from the government to study at university,” Connell said.

Lindsay Erdman, another teacher at the American International School, told the newspaper that she plans to stay longer in Vietnam because she wants to learn more about the country’s culture and people.

Erdman, teaches visual arts at the international school, said that during her first week in the country, her motorbike broke down at a corner in District 1. An older local man then pointed to a KFC restaurant on the other side of the road.

“I needed to have my bike repaired. I did not want to eat anything,” she recalled. “I argued with him using body language for ten minutes and the old man was angry with me,” she said.

The Canadian woman only realized how generous and kind the local man was being when he took her bike across the street and showed her a small bike repair shop on the sidewalk in front of the KFC.

“It has been a learning process and it was very humbling. I learned that you have to be more open to people when they try to help you. I’m not here to teach other people only. I’m here also to learn from other people,” she said.

Unlike adventure-seeking Western teachers, some Asian teachers said they choose to live in Vietnam as expatriates thanks to the safe and comfortable living environment. Most of them are experienced teachers, who are in huge demand in the country.

After spending three months seeing how life is in Vietnam, V. Ashok Kumar from India decided to move to Ho Chi Minh City to live here with his wife and little daughter in 2008. “I told my father that I wanted to come to Ho Chi Minh City since this city is growing rapidly and he agreed,” Kumar said.

“Vietnam has a climate and living conditions similar to those in India. The country is even safer than my home country,” Kumar, who lectures in applied science at RMIT Vietnam in District 7, added. RMIT Vietnam, an Asian hub of Melbourne-based RMIT University, which is Australia's biggest tertiary institution, is a common place for Asian teachers.

Meanwhile, it was quite difficult for Cherry Sriratanaviriyakul from Thailand to convince her mother to allow her to be a teacher in Vietnam at first, but she succeeded in doing so eventually. Now she teaches information systems at RMIT and has been living in Vietnam for almost six years.

“Before coming to Vietnam, I had lectured in hospitality at an international university in Bangkok for four years. My colleagues told me about RMIT and I decided to give it a try because I wanted to live abroad,” Sriratanaviriyakul said.

Anna Lyza Felipe, who had taught at a university in the Philippines for 15 years, received a surprise call from RMIT for a job interview when she was on vacation in Vietnam three years ago.

“I just sent my CV to RMIT without caring about the results. But when my vacation was coming to an end, I received a call for an interview from the school,” the Filipina said. “After that, I talked to my university in the Philippines and made a decision to quit that job to come to Vietnam,” she said.

Sriratanaviriyakul, Kumar, and Felipe chose to live in the Phu My Hung urban area in District 7 because there is a large community of expats there so they face few language barriers and little culture shock. Phu My Hung is also safe and comfortable and in close proximity to their school.

According to figures released by the Ho Chi Minh City Department of Labor, War Invalids, and Social Affairs, 4,146 people from 72 countries and territories around the world were granted work permits to teach in Ho Chi Minh City from 2011 to October 2014. Britons topped the list with 1,197 teachers, followed by Americans and Australians with 1,163 and 353, respectively.

To be employed at English language centers in Vietnam, candidates must be native English speakers, have a bachelor’s degree, and possess qualifications in ELT which are equivalent to a CELTA. Those who have professional development background, ever engaged in extracurricular activities, or charity and volunteer work have a better chance of getting a teaching job.

Meanwhile, international schools prioritize experienced teachers. Teachers who are not native English speakers have to submit their international language certificates such as the TOEFL or IELTS.