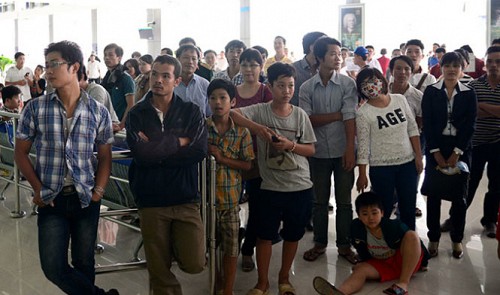 No compensation for airlines affected by blackout at Vietnam’s largest airport: watchdog

No Vietnamese or international aviation laws have regulations stipulating that an air traffic controller has to recompense the carriers in case of “unavoidable technical issues that affect the latter’s operations,” Lai Xuan Thanh, head of the Civil Aviation Authority of Vietnam (CAAV), told Tuoi Tre (Youth) newspaper.

“The aviation industry is typically known to operate under huge pressure, so a mutual regulation among aviation laws is that there is no required compensation for technical issues,” Thanh added.

Vietnam’s aviation industry was hit by an unprecedented blow on November 20 when an hour-long blackout occurred at Tan Son Nhat International Airport, disabling the radar system that controls air traffic at the terminal.

Thanh said in a media meeting on Friday that the blackout took place because the uninterruptible power supply (UPS) systems that power the Ho Chi Minh City Area Control Center (ACC), which oversees flights to and from Tan Son Nhat, went offline.

Tan Son Nhat, which is the biggest airport in Vietnam, handles about 20 million passengers a year.

The ACC is operated by the Southern Airports Corporation, a subsidiary of the Vietnam Airport Traffic Management (VATM).

Members of the public and experts have thus suggested that the VATM be held responsible for the incident.

“VATM is a business that offers air traffic management services, and the airlines are their direct customers,” a reader named Do Trung Hieu wrote to Tuoi Tre.

“The carriers have to pay the VATM certain fees in accordance with their agreement, so if the VATM causes damage to the airlines, it is responsible for compensating them.”

However, both the CAAV and the VATM have seemingly ducked responsibility.

VATM deputy general director Do Huu Gia said last week that the incident is a force majeure, or uncontrollable occurrence.

“The equipment is under strict checks and regular maintenance.

“But just as we human can get sick sometimes, the machines too can break down now and then,” Gia was quoted as saying at a press meeting in Hanoi on November 21 by Lao Dong (Labor) newspaper.

Ha Hai, a lawyer from the Ho Chi Minh City Bar Association, said the VATM must compensate the affected airlines as a power outage is not considered an unavoidable incident under the civil law.

“It’s a human error since VATM employees failed to properly check their equipment and detect the issues in time,” he elaborated.

A 15-day suspension was imposed on three employees of the Southern Airports Corporation on Sunday for their responsibility for the blackout.