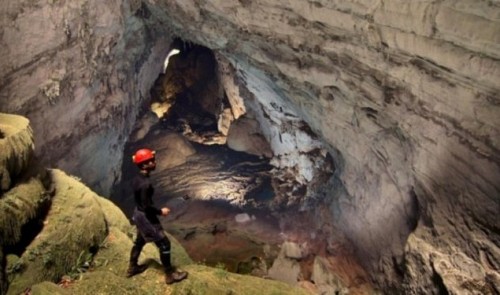 A British explorer who joined the British team which first explored Son Doong Cave – the world’s current largest – in central Vietnam back in the early 1990s urged in an article posted on a New Zealand newswire last week against the construction of a cable car system through the cave.

Andy McKenzie’s article – “Preserving Son Doong, 'the biggest cave in the world’” – was published on www.stuff.co.nz on Monday last week.

The man precluded his article by saying that he has been lucky enough to explore new caves in New Zealand, Australia, Tasmania, Peru, China and Europe, but the time he spent with the Vietnam Caves Project back in the early 1990s was the most exciting.

The Son Doong grotto was stumbled upon in 1991 by Ho Khanh, a Vietnamese, but it only became well-known after a group of scientists from the British Cave Research Association, led by Howard and Deb Limbert, explored it in 2009.

McKenzie took part in his second expedition with the British team to Son Doong in 2007, when they discovered more caverns, including Tang Abyss.

“Tang Abyss became my life's focus until 2010 when we finally got to return to and descend its impressively wide, sunshine-lit, 255m deep vertical entrance pitch,” he wrote in the article.

McKenzie is not only held in awe by Son Doong Cave’s grandeur and resplendence, with its gorgeous landscapes coupled through massive roof collapses, or dolines; but also marvels at its own weather system, a completely unique ecosystem, and its karst – some of the oldest in the world.

He quoted a UNESCO assessment as saying that "The karst formation of Phong Nha-Ke Bang National Park has evolved since the Palaeozoic (some 400 million years ago) and so is the oldest major karst area in Asia” and “Phong Nha displays an impressive amount of evidence of earth's history. It is a site of very great importance for increasing our understanding of the geologic, geomorphic and geo-chronological history of the region.”

The explorer pointed out in the article that Phong Nha-Ke Bang has always had entry restrictions requiring multiple permissions to gain access.

He added he himself and other explorers have supported this restricted access.

However, McKenzie expressed his astonishment and frustration that Quang Binh Province and relevant ministries are now taking into account a project to build a cable car system leading to Son Doong Cave to carry tourists to Doline 2.

“Here, hundreds of thousands of tourists will have moderately restricted access to the cave environment, against all UNESCO, expert and local advice. It looks like they may get permission,” he warned. McKenzie added that an international online movement against the development has been initiated to inform the Vietnamese authorities of the concern for the preservation of the Son Doong grotto.

“Whilst the larger community seems to support and encourage sustainable development in the national park, this type of mass, quick buck tourism is not supported,” he stressed.

The explorer concluded his article by inviting readers to visit the Facebook page “Save Son Doong” for more information on the proposed cable car plans and subsequent petition.

The Quang Binh People’s Committee said in late October this year that they are taking into careful consideration a proposed project to build a cable car system in Son Doong amidst mounting concern among the public and conservation experts regarding the potential harm the system may do to the site.

The north-central province had earlier announced it already permitted Sun Group – a local developer of tourism properties – to conduct surveys for the construction of such a cable car system.

The 10.6km long system, if built, would cost roughly US$211.8 million and have four sections and begin at the entrance to Tien Son Cavern.

The last section would extend from the mouth to the floor of the Son Doong grotto’s second pit.

Members of the public and conservation experts are worried that the cable cars will result in a sharp rise in the number of tourists to the site from the current average of 200 per year, which may bring human intervention and adverse impacts to Son Doong Cave and the park’s other attractions.

In September this year, the province began officially launching tours to the Son Doong grotto after running them on a year-long pilot basis.

The adventure tours cost $3,000-6,000 per person. Hundreds of potential customers, many of whom are foreigners, are on the waiting list for their chance to have a taste of what the world’s largest cave has to offer.

Truong An Ninh, of the provincial People’s Committee, said in an interview with Tuoi Tre (Youth) newspaper that the province is gathering public and expert opinions before reaching a final decision.

This final decision depends on whether Sun Group can meet Quang Binh’s and UNESCO’s requirements before constructing the cable car system, he noted.

Many members of the public, including Tuoi Tre readers, expressed their hopes that UNESCO will reject the plan.

The province, which is also home to the final resting place of legendary Vietnamese General Vo Nguyen Giap, has received 2.5 million visits so far this year, a number which is expected to rise to over three million next year, according to Ninh.

Howard Limbert, head of the British exploration team that has operated in the Phong Nha-Ke Bang area over the past 24 years, earlier expressed strong concerns about the project’s feasibility.

Limbert has discovered hundreds of caves in Quang Binh and taken steps to put 200 kilometers of local caves on the global list.

“I personally find the project a bad idea. The damage to Son Doong Cave would be irreversible, and the cable cars would rob the cave of its pristine charms and the adventure thrills it has to offer. The construction would also take its toll on the cave’s surrounding areas,” Limbert noted in an earlier interview with Tuoi Tre.

‘Mass tourism’ would bring short-term benefits to the province, but would cause the number of foreign tourists to drop in the long run, he warned.

More than 200 individuals, including multiple banking and business moguls, were summoned to court