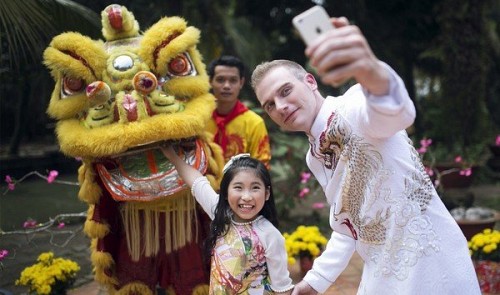 A half-Korean girl and an American expat, who together won the first Vietnamese season of the “Your Face Sounds Familiar Kids” reality show, have debuted their CD and richly-colored music video to celebrate the upcoming Tet (Lunar New Year).

Ju Uyen Nhi, also known as Ju So Yeun, and Kyo York, who served as her mentor in the Portuguese-origin reality TV show “Your Face Sounds Familiar Kids” last year, have jointly released a CD and music video titled “Xuan Yeu Thuong” (Spring of Love) right ahead of Tet.

Tet begins on February 19, with festivities lingering on around one week after that.