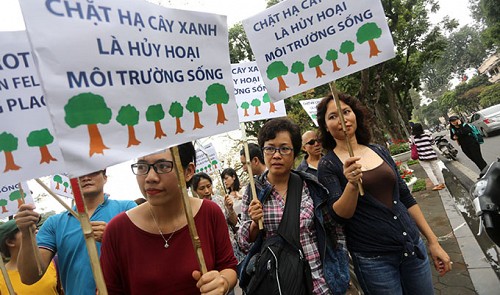 One of the donors who provided funds for carrying out a plan – now suspended – to cut down thousands of trees and replace them with new varieties in Hanoi has expressed their shock at hearing a capital leader pass the buck to them when meeting with public objections.

A representative of lender VPBank told Tuoi Tre (Youth) newspaper on Saturday that it was all stunned by a statement from the deputy chairman of the Hanoi People’s Committee that the recent mass tree cutting was done following pressure from those who contributed money to execute the plan.

VPBank underscored that its donation was meant to grow new trees, not to chop down old ones, and that the lender will work with local authorities to clarify the statement made by Deputy Chairman Nguyen Quoc Hung.