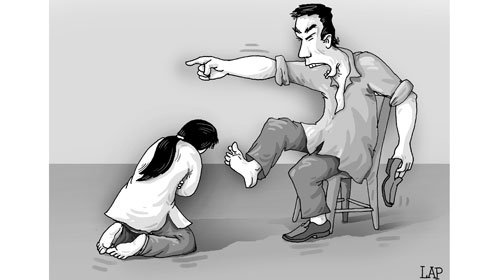 Vietnam will be free from domestic violence 20 years later

Editor’s note: Khanh Hung dreams that 20 years later, there will be no domestic violence in Vietnam, as he joined the “Ky Vong Viet Nam 20 Nam Toi” (“My Expectations for Vietnam in 20 Years”) writing contest.

In recent times, local media have been riddled with many heart-rending stories regarding domestic violence. This leaves me dreaming that 20 years later, when I open a newspaper, I would not have to face any stories of domestic violence as I do now.

Perhaps everyone wishes that they are born to a close-knit, loving family. Jealousy and resentment are inevitable in a family, but all disputes and ill feelings are supposed to be straightened out based on listening and mutual understanding. Spouses are not to resolve their conflicts with fists.

How great it is that children have their voices heard in their families, and everyone else in the family respects their likes and aspirations, and helps them turn their dreams into reality.

How wondrous it is that the entire family would pour out their hearts over dinner. Husbands and wives, and parents and children would share their obligations equally, and women would no longer languish within the ethical codes imposed on them since feudal times.

Twenty years on, newspapers would no longer feature heart-rending titles such as “Father beats daughter to force wife to return,” or “Husband hammers wife in the head to death.”

Twenty years later, everyone would be aware that families are where they return to, and they would all strive their best to cherish a blissful family.

That’s my dream about the future Vietnam. Families are the “cells” of society, and happy, fruitful families serve as the foundation for a society to thrive on. No one wants an affluent society which crawls with domestic violence.

Twenty years is not a long road, therefore we should get started today. In 20 years, I’ll enter middle age and get married. My family will surely glitter with happiness and be free from household violence.

Everyone in society should join hands

First of all, we need to clarify to family members what domestic violence is. The malady is not limited to physical assaults which inflict bodily injuries, but also mental torment that is afflicted via verbal abuse, menace, subjecting kin to pressure, hindering spiritual freedom, imposing your will on a family member, or forced sex.

To enhance people’s awareness of domestic violence, classes should be run and books handed out so that they can tell when they are victimized.

In our country, most cases of household violence occur in poor families which are often ill-educated and abuse alcohol.

To put an end to the malaise, measures should be taken to provide jobs for such families, improve their means of living, and organize classes which show participants how to behave properly toward their family members. Both parents and children are to join such classes to learn more about domestic violence. In addition, the sale of alcoholic drinks should be banned at certain hours and for people of certain age groups.

Rural people tend to seek solace in alcoholic drinks to escape their reality of destitution. Beer and wine cause them to lose control, leading to violence, mostly physical assaults and beatings.

Meanwhile, well-off families tend to be plagued by mental violence. This may take root in gender equality, as many families, even though they live in modern times, obstinately stick to the feudal ideology stipulating that men are more socially worthy than women and that women are typically bound by womanly virtues and household chores. Therefore, victims usually resign themselves to violence as they think it is no big cause for concern and reporting it would defame themselves and their families.

To liberate ourselves from such deep-rooted ideology, we are supposed to take classes on the rights and obligations of family members. Women should grasp their rights while men should know their obligations better.

Today’s media have covered familial disputes profusely, while it’s quite difficult to read about harmonious, happy families on the Internet. Such a difference has undermined people’s faith in genuine happy families.

Local media thus should take the lead. Cases of domestic violence should be covered and condemned, but happy family tales should also be featured.

The Law on Preventing and Combating Domestic Violence should be made clearer. Though the law took effect in 2008, it is only remembered when cases with disastrous consequences occur. Many offenders have walked away with light penalties, which has hardened potential perpetrators and failed to deter them from striking.

Therefore, the law should be open to comments and contributions from victims of violence and non-victims, and people who are marrying.

To do so, forums should be launched by local media so that the aforementioned groups can visit and have their voices heard.

There are other solutions to domestic violence. Twenty years is not a long time, but it is enough to nurture a new generation who would say no to household violence. Society can only thrive if its constituent families function well.