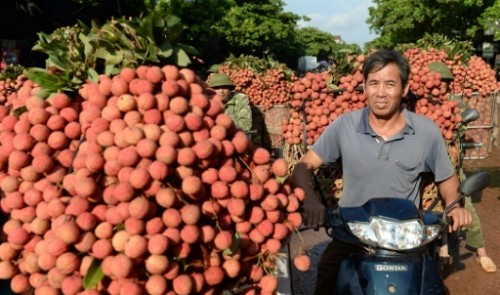 A bevy of workers are carefully sorting and grading an enormous pile of litchis at a packing house in northern Vietnam. The best of the bunch will go to China.

"China is by far our largest market," fruit trader Tran Van Sang, 42, told AFP at his warehouse in Luc Ngan -- a small town just north of Hanoi which is taken over by litchis during the tropical fruit's short six-week season.

Some 60 percent of Vietnam's litchi crop is exported to China, according to official figures.

But the trade is highly vulnerable to political bickering between the two countries, driving a shift into new markets with Vietnamese litchi exported to Australia and America for the first time this year.

Last year, peak season arrived in the middle of a bitter maritime standoff, sparked after Beijing moved an oil rig into waters in the East Vietnam Sea.

"It was difficult -- we had a bumper crop but the Chinese buyers didn't come," said Sang.

But it has a dramatic effect on some sectors, like the litchi, a fruit native to northern Vietnam and southern China. Last year, traders said whole unsold consignments of litchi were simply left to rot in border areas.

This year, although maritime tensions remain high over Beijing's island-building projects in disputed waters, the Chinese buyers are back in Luc Ngan, with exports up 50 percent year-on-year to 40,000 tons, according to official figures.

But in response to the problems of 2014, some farmers and traders have moved on -- hoping to find higher prices and more stable markets elsewhere.

The volume exported to Australia and the US was small -- just 35 tons combined -- but it was a significant step, experts say.

"Vietnam could have a real breakthrough in the export of litchi in coming years," Mai Xuan Thin, the CEO of Red Dragon, a fruit exporter, told AFP.

If the country focuses on food security and meeting higher US and Australian standards "exports will certainly be higher next year", he said.

For Australian importer Alex Alexopoulos, there are clear benefits to buying Vietnamese litchi, which will be flown to Melbourne.

"It's a lot quicker to get fruit from Vietnam (by air) than from top of Australia to the bottom, which would take four days by truck," he toldAFP.

"So it's fresher to eat litchis in Melbourne from Vietnam... and freshness is our main concern," he added.

Vietnam, already a major coffee, rice and catfish exporter, is slowly turning its attention to fruit. For now, it is a relative minnow on the global stage, the eighth largest fruit exporter in Asia, behind leaders China, Thailand and India.

The country's fruit crop is mostly consumed domestically, but exports are growing -- up from $622 million in 2011 to over $1.4 billion in 2014, according to official figures.

The government is targeting a ten-fold increase over the coming years, with crops like longan, dragon fruit and litchi being given priority.

Overall, Vietnam has good potential, said Robert Guillermo, a preclearance specialist at the US Department of Agriculture.

"On a scale of one to ten, I'd give them eight. They're very good. The people are very good... they listen to suggestions we make," he said.

"Vietnam must diversify its export markets to be more active and more economically profitable," he said.

Vietnam is part of the Trans Pacific Partnership, a huge US-led trade deal expected to be sealed this year, and this could both be a huge benefit to farmers, but also a risk.

"The country will have to deal with a very strong competition on quality and price of products. It will be a challenge," he said.

Farmers selling to US or Australian buyers are getting about 20 percent above the typical market price, said Nguyen Huu Dat of Vietnam's Plant Protection Department.

"Overall, prices are high and stable now compared to last year (when Chinese buyers stayed away). Farmers are very happy," he told AFP.

Farmer Nguyen Thi Nghi, 56, in northern Thanh Ha province, is hoping she will double her family's income by selling her litchis to Australia.

Farmer Nguyen Thi Nu, 55, in Hai Duong province, said the key to keeping foreign buyers happy was to stay away from pesticides.

"I never use chemicals," she said. "The climate (in Hai Duong) is perfect for litchi... people come from all over to buy our fruit."