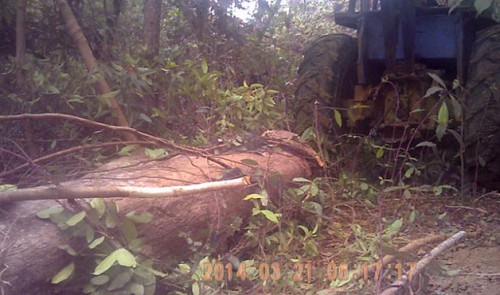 Large areas of wild forests in the central Vietnamese province of Nghe An have been ravaged by illegal loggers, who have brought in heavy machines to fell big trees.

But local forest management agencies said they have not heard of the devastation.

The destruction has only been uncovered and stopped by PC49, the environmental police department of the province, thanks to coordination with the local Party Committee.

In late June, Tuoi Tre (Youth) newspaper followed a raid by local police to catch illegal loggers chopping down trees in the forest on the peak of Dong Deo Mountain in Con Cuong District.

Lieutenant Colonel Ha Quang Chung, 38, disguised himself as a logger to enter the forest on June 29.

Along the only path going deep into the forest in Dong Deo were bare hills with an abundance of timber logs by the bank of a stream.

The car of the disguised policemen continued on the path, but Chung failed to access the edge of the forest because of a ‘minefield’ of numerous sharp nails to puncture the tires of any car.

The ‘minefield’ trap was set by illegal loggers to prevent police from reaching them.

A police officer was assigned to stay with the car while the others entered the forest.

They saw two other lumber fields within 30 minutes of walking on the path to the center of the woods.

“Illegal loggers have been spreading devastation these days,” said Chung.

They passed many such loggers on the way to a big ‘timber sawing camp,’ and the men thought the ‘strangers’ were locals hired to carry wood out of the forest.

Other loggers in the area immediately tried to escape.

At the time, another group of policemen seized several machines, including three bulldozers owned by the illegal loggers.

A tractor driver was caught there, and hundreds of cubic meters of wood were confiscated at the scene.

Chung said there are generally two kinds of illegal loggers in Nghe An forests: one is an organizer, who supplies equipment and labor to devastate the woods, while the other is a lumber buyer.

The chairman of the People’s Committee of Con Cuong District convened an urgent meeting with the participation of local officials to draw out measures to prevent illegal logging and assign responsibilities to relevant agencies.

Authorities at the commune level and forest management units are weak and were unable to discover the devastation, he added.

The Nghe An Department of Agriculture and Rural Development has failed to perform its supervisory function.