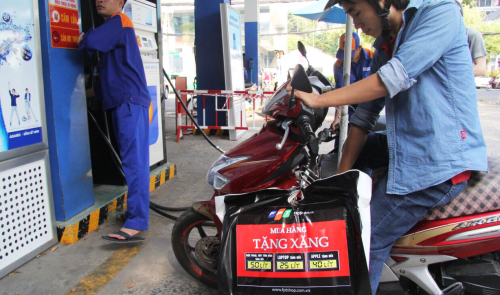 What is better than going home after drinking beer or buying hi-tech gadgets with your motorcycle or car refilled with free gasoline?

When offering discounts or gifts seems too old a marketing strategy, some businesses and restaurants in Vietnam have come up with a new approach: giving customers fuel for free.

FPT Shop, one of the biggest retailers of hi-tech gadgets, awarded its customers dozens of liters of petrol during a month-long campaign from May 25.

Those who bought smartphones, tablets and laptops from the chain would receive up to 50 liters of gasoline, according to the company’s website.

Apple products came with a big fuel gift, 40 liters, whereas customers would go home with 25 liters of free petrol for buying a laptop, and 50 liters for a smartphone purchase.

FPT Shop says it has been running such campaigns annually since 2013.

The model seems so effective that another mobile phone store chain, Hnam Mobile, chose to follow when it opened the 13th shop in Ho Chi Minh City earlier this month.

The company gifted 600 liters of gasoline to any customer who left the store with a purchase worth more than VND1 million (US$50).

But hi-tech devices are not the only type of goods linked to gasoline freebies.

To mark its opening earlier this month, a restaurant that serves German beer in Hanoi gifted free gasoline to its customers, with a liter of petrol given away for every liter of beer consumed.

The promotion attracted 150 customers on the inauguration day of the restaurant, newswire Zing reported on July 7.

Another beer restaurant in Tay Ho District applied the same method, and had more than 300 customers on inauguration.

“Our customers are mostly men, who come by car or motorcycle, so selling the drink along with fuel will make them curious,” Tran Ngoc Linh, the restaurant manager, told VnExpress.

A beer drinker told VnExpress that while the free fuel is not so valuable, the promotion is quite effective, as it is new to customers.

“A liter of beer costs VND100,000, and a liter of gasoline fetches around VND20,000. This is no different from a normal 20 percent discount,” he elaborated. “But I still feel interested.”

The forms of giving away fuel to customers also vary among businesses.

While FPT Shop exchanged the fuel into money per the current price and paid customers in cash, the beer restaurants in Hanoi pumped the fuel directly into customers’ vehicles. Drinkers could also ask to deduct the value of the fuel gifts from their bills.

Ha Anh Tuan, a media expert, told Zing that the fuel gift promotion is interesting as it gives customers a feeling that they can save travel costs when going to buy mobile phones or drink beer.

“Customers are also attracted as it is not a common promotion campaign,” he said.

But Pham Minh Toan, chairman of the Time Universal Communications media company, said it is unnatural to link fuel with beer.

“It’d be better if beer drinkers get free taxi rides as gifts, which will be more meaningful in terms of safety,” he told Zing.

“It’s inconvenient to carry bottles of petrol back home, while deducting the fuel gifts from the bills will make it a normal promotion method.”

In Vietnam, fuel prices are regulated by state agencies and usually fluctuate against the world trend.

Petrol prices in the Southeast Asian country have been adjusted seven times so far this year, now selling at VND20,380 a liter, following the latest reduction of VND300 a liter on July 4.