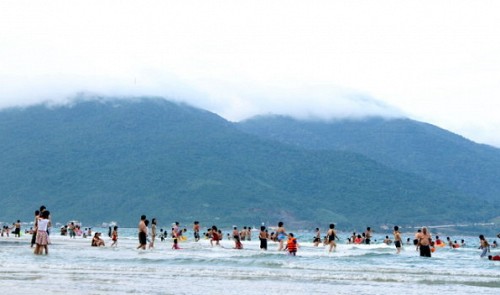 People who drop cigarette butts, litter, urinate or defecate at beaches and other public places in the central city of Da Nang will be fined up to VND300,000 (nearly US$14), starting next week.  Tran Chi Cuong, deputy director of the Da Nang Department of Culture, Sports, and Tourism, on Thursday said the People’s Committee had approved a pilot plan to give pecuniary fines to people who commit such acts, Phap Luat TP. Ho Chi Minh (Ho Chi Minh City Law) newspaper reported. The plan will be executed in Ngu Hanh Son and Son Tra Districts from next week to September 30, the newspaper said. Interdisciplinary law enforcement teams will take charge of detecting and penalizing violators, Cuong was quoted by the newspaper as saying.  The authorities expected to implement the plan as of Wednesday, July 15, but postponed it until next week to have more time for necessary preparations, he added. Under the plan, a fine of VND50,000-100,000 ($2.3-4.6) is applied to dropping cigarette butts. Another fine of VND100,000-200,000 ($4.6-9.2) will be imposed on those who randomly discharge garbage in public locations, including beaches. The highest fines, from VND200,000 to VND300,000 (nearly $14), will be given to people who urinate or defecate on the beach and in other public locations including tenements, trade centers and others. From now to July 30, the Department of Culture, Sports, and Tourism will coordinate with beach management boards to install warning signs to provide information on the penalties. Any violators who resist law enforcement officers on duty will be punished in accordance with applicable regulations, local authorities said.