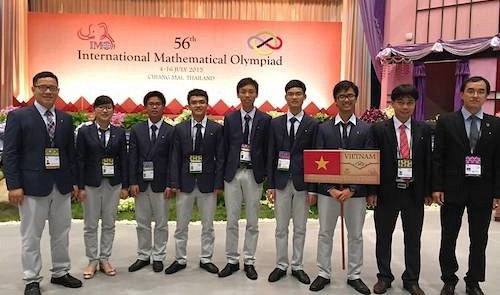 The Vietnamese team has won numerous medals at the 56th International Mathematical Olympiad, ranking 5th among 104 participating countries and territories.

The six-member team claimed two gold medals, three silvers and one bronze at the 2015 contest, held in Chiang Mai, Thailand from July 4 to 16.

The golds went to 11th grader Vu Xuan Trung, from the northern province of Thai Binh, and 12th grader Nguyen The Hoan, from Hanoi.

Held annually in a different country each year, the International Mathematical Olympiad (IMO) is the world championship mathematics competition for high school students.

The first IMO was held in 1959 in Romania, with seven participating countries. Nowadays, there are over 100 competing countries and territories.

Thao also received a special prize for the female contestants with the highest achievements.